Regular expressions are a very large topic and many books have been written about it. It’s also a topic that many people find intimidating due to the rather cryptic and compact syntax and because the syntax varies considerably from language to language.

The VBA RegEx syntax differs quite a lot from other RegEx syntaxes, such as those used in Java, Perl or Python. This is primarily because the VBA RegEx object comes with optional parameters that you must sometimes specify to obtain the same results as you would by using standard RegEx syntax in other languages. I know. This explanation even sounds weird.

For these reasons, we’ll focus on VBA RegEx in this article. There are a few sections where we’ll assume you already have a basic understanding of regular expressions, but don’t worry if you’re new to RegEx! If you’re completely new to the topic and you find it slightly intimidating or difficult, you should still be able to grasp the basic concepts after reading this, so stick with us!

We’ll start by presenting the essential Regex syntax and then we’ll show you how to instantiate the RegEx object in VBA. Next, we’ll describe the parameters of the VBA RegEx object and present a general VBA RegEx function which returns substring matches from the input text passed to the function. We’ll also show you a fairly advanced example which incorporates many of the RegEx features we’ve previously presented and then we’ll finish off with a brief discussion on application ideas and when not to use VBA RegEx.

A RegEx search pattern is a sequence of characters consisting of one or more of the following components:

A metacharacter is a character, or combination of characters, with a special meaning in a RegEx pattern. Unlike literal characters, metacharacters can match several different characters in the input text or they can even represent something other than a character. I know some of these descriptions may be a bit confusing, but I encourage you to take a moment to familiarize yourself with the following metacharacters:

The characters , and are called anchors, since they match a position before, after, or between characters.

Character classes or character sets are specified with square brackets [ ]. Some of the most common ones are:

The set of lower-case letters ranging from a to z.

The set of upper-case letters ranging from A to Z.

The set of single digits ranging from 0 to 9.

Character classes are frequently used in conjunction with operators in the search pattern. For instance, translates to “find one or more digits”, rather than just a single digit in the range from zero to five.

Start by opening the Visual Basic Editor and then go to Tools > References… and set a reference to the Microsoft VBScript Regular Expressions 5.5 Object Library. 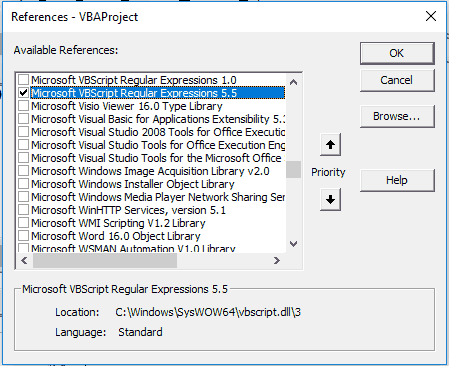 Run the procedure to invoke the function.

Inside the procedure you specify the input text with the variable and you define your search pattern in the variable. In this example, we’ve included a string containing a hypothetical email address which contains all character types allowed in valid email addresses. (Yes, plus signs are allowed). Regardless of how you rearrange this email address within the input string, our custom function will find it and return it. That is, provided you pass the correct parameters to it!

The first two parameters of our RegEx function are (1) the input string and (2) the search pattern variables we just discussed. These parameters are mandatory, and it should be self-evident why that is. Conversely, the next three parameters are optional:

That’s pretty ugly, isn’t it? Just in case you’re new to RegEx and this search pattern is complete gobbledygook to you, let’s break it down in more detail!

The bracketed terms in the pattern above denote character sets and the plus signs at the end of them are quantifiers specifying how many characters we’re looking for. Finally, the “at” character (@) in the middle denotes a literal search for this character (In other words, we’re looking for an @ symbol). The dot (.) between the last two pair of square brackets is also searching for a literal dot, but this character has been escaped by a backslash, since the dot is a reserved symbol in RegEx syntax.

Reading from left to right, we could translate the search pattern example to English like this:

one or more occurrences of either a lower-case or upper-case letter ranging from a to z, or a hyphen (-)

In this tutorial, we’ve focused on the “find” functionality of regular expressions, but it should be mentioned that they’re often used for “find and replace “ too. The latter is what the method of the VBA RegEx object allows you to do. Including the “find” and “find and replace” functionalities, you can use VBA regular expressions for a wide range of advanced text processing, such as

Even though there are many legitimate RegEx uses, there are also instances where you probably shouldn’t use this approach: