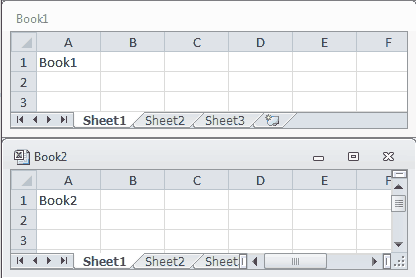 This macro writes the workbook name to “Sheet1” and cell “A1” of each open workbook. The ability to call different workbooks by name allows you to interact with multiple workbooks (Excel files) from a single VBA macro.

Fortunately, you don’t have to define the workbook name each time you write a new line. VBA defaults the file location to the ActiveWorkbook. 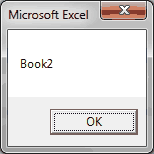 Because ActiveWorkbook is the default location, you don’t have to mention it if you’re only working with one workbook. This is why we were able to omit it in our Range Object Examples.

The Workbooks.Add Method creates a new workbook and sets it to the ActiveWorkbook.

If you’re working with multiple workbooks, you don’t even have to type the long Workbook string each time. Let’s pretend you have an open workbook called , but it’s not your active workbook. Normally, you would have to type the following code at the front of each line of your macro that interacts with your workbook.

There’s an easier way! Instead, you can write shorter macros by declaring your Workbook object at the beginning of your macro, like we do below:

The modification adds 2 more lines, but it’s a much cleaner macro. You’ve replaced the long lines of code with the variable . Notice, the Dim statement is used to declare a workbook object variable.

We’ll talk more about variables and declarations in two lessons, so stay tuned!

You now know how to reference workbooks by name, activate new workbooks and add a new workbook. Since you are familiar with the Workbook Object, I hope you’ll join me as I introduce the Worksheet Object. Worksheets are far more exciting than Workbooks.

If you really want to learn VBA, grab a copy of our Ultimate VBA Training Bundle before reading our next tutorial. We specifically created these cheat sheets to help you get the most out of our upcoming lessons. Together, the set has over 200 practical tips covering the 125 most important topics in Excel VBA. We also stuffed it with 140 helpful macro examples.