The ComboBox is a Control for VBA userforms that allows the user to choose from a list of options. It is also known as a drop-down menu, but to serve its purpose as a dropdown menu, you’ll first need to populate the combobox for the user so they can actually make a choice. There are two ways to populate a ComboBox with VBA:

The rest of this tutorial will teach you how to add entries to, or populate, your own VBA userform comboboxes, and we’ll have a little fun teaching it!

Before we write any code to populate our combobox, we need to create the box itself and the userform on which it lives.

I’m sure you already have your own design, but in this tutorial, our userform will carry the name , our command button will be , and the combobox itself will be . 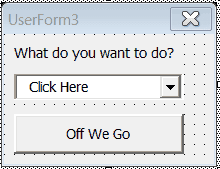 Userform with three elements: a combobox, a label, and a button

As you can see, we put default text “Click Here” into the combobox. This is not one of the dropdown options; it’s simply a filler before the user clicks the menu. You can edit it directly by clicking into the combobox in the preview window, just like for the Label and CommandButton controls, but what you really want to do is populate your combobox using VBA code, like we’ll demonstrate in the next section.

In this section, we will show you how to populate a combobox in the UserForm_Initialize VBA Event by either adding items sequentially or reading the values directly from an array.

VBA hands control off to the UserForm_Initialize Event only after the userform has been called. If you want a more in-depth discussion about the logic of showing a userform, check out our Userform Show article. In short, here’s the code for showing our particular userform:

Make sure you place this in a regular Module, not the userform’s dedicated private code.

Now we’re going to begin actually populating the values in our ComboBox. One way to add multiple values to your ComboBox is to use the ComboBox List property, or .List.

To use the ComboBox .List property, you simply need to put your dropdown menu options into an array and separate each dropdown item by a comma. You can use the Array function to create the array needed for the .List property. Don’t forget each option needs quotes since your entries are strings!

Here’s a sample code that goes into the userform’s private code, not a regular module, and adds two items to your dropdown list once the userform is initialized:

When you run this code, you’ll get this beauty: 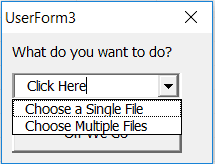 The userform with populated combobox open

Notice the userform’s caption is “UserForm3”, but the userform name is . I’m pointing this out because the same distinction applies to your combobox. Don’t get the (Name) and Caption or Text values mixed up! You will get a runtime error if you try to use the caption as the object name. You can change the object name and caption in the Properties window (F4), typically on the bottom left of the VBE.

The Properties Window for with the Caption and Name Circled

Populate ComboBox with a Range

You can also use the .List property to populate a userform combobox with a range of cells in your spreadsheet. Take this macro, for example:

This macro will quickly add all the values in range to your ComboBox. It’s incredibly fast and very helpful if your userform is designed to accept data from your spreadsheet.

Speaking of columns of data, the .List property also has an optional second argument, pvargColumn, to let you populate specific columns of a multicolumn ComboBox.

If you want to use the optional arguments in the .List property to create multi-columned comboboxes, there are some extra steps to take.

First you need to change the number of columns in your combobox, much like you would in my tutorial on aligning columns differently in a UserForm ListBox. You can do this under the Properties window mentioned earlier, or you can do it at runtime by using the .ColumnCount property of the combobox object, like this:

Then, you can create a dummy array that matches the dimensions you want for the list of options. Remember the .List array is zero-based. Let’s say you want a 3-row, 2-column list with any kind of data, like numbers or dates, so you dimensionalize an array, like this:

Either way, we’ll use the .List property, just like before, to add items to your ComboBox. The second option accesses each “cell” in the list to fill out the final dropdown menu.

Whichever option you choose, you’ll be left with a nice two-column, three-row VBA ComboBox that’s fully populated, like this one: 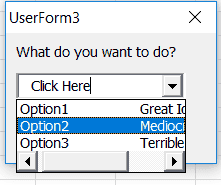 If instead you want to add items with methods (as opposed to properties), you can use the ComboBox .AddItem method during initialization. Each time you call the AddItems method, a new item will appear in your ComboBox.

More interestingly, you can use .AddItems to add items dynamically after the userform has already been created.

In code, populating your UserForm ComboBox dynamically would look something like this:

We used the Event UserForm_Click, so when the user clicks on the userform area, an item is added to the bottom of our dropdown list. The initial userform has the default values we added with the .List property, but now we let the user add items by clicking on the userform, as well. 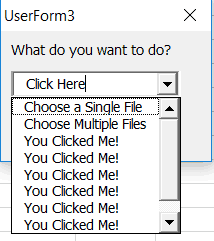 The dropdown menu after clicking on the userform several times

I know this is a silly example, but it demonstrates how you can dynamically alter your combobox when certain conditions are met; in this case, when the user clicks the form.

You could also populate the list with .AddItem in the initialization stage if you wanted, like this:

The VBA ComboBox AddItem method is the most popular way to add items to a userform, although I’ve found both options to be equally flexible.

Imagine you had a lot of rows in a text file or something that you wanted to add to your combobox. You could nest the .AddItem method inside a For Loop to programatically add each item. Placing the AddItem ComboBox method inside a loop is a common practice for populating a UserForm ComboBoxes.

The AddItem method of userform comboboxes also accepts an optional second argument: pvargIndex. When included, the pvargIndex tells your combobox where you want to add your new entry.

The items in your combobox range from 0 (at the top) to .ListCount (at the bottom). For example, if you fed the argument a 0, it would add a new entry to the top of your userform. Omitting the argument is the same as passing the AddItem method an argument of .ListCount.

Let’s look at a couple examples. In the following code, the “You Clicked Me!” item is added in the first position instead of the default last position.

to place the code at the top of your ComboBox (Position 0).

Let’s take a look at one more example.

In this example, we dynamically populated our combobox by adding an item to the top, bottom and at the 3rd entry in the dropdown menu by specifying a pvargIndex position. Notice how a pvargIndex of 2 added an item to the 3rd slot. Remember, ComboBox indexing begins at position 0!. 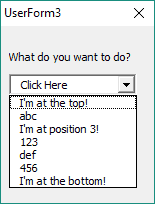 pvargIndex to add items to ComboBox

Creative developers can use both .List and .AddItem to make interactive userform dropdown lists. By using ComboBoxes (or dropdowns), developers are able to guide user interactions with the program while still allowing a degree of freedom to the end users.