VBA DoEvents yields execution of your macro, so your computer processor will be able to simultaneously run other tasks and recognize other events. The VBA DoEvents function also enables interruption of code execution so it’s easier to stop a running macro.

Only few things in life are more frustrating than trying the halt the execution of a program and not being able to because Excel has become unresponsive. I’m sure you’ve been there. We’ve all made a mistake in a code which causes an infinite loop or something Your program will, in theory, never terminate and Excel will remain unresponsive until you shut down your Excel application! So frustrating.

In the first part of this tutorial, we’ll show you how to circumvent this and other similar problems by using the VBA DoEvents function. However, as the saying goes, all good things come with a price. The DoEvents function in VBA is no exception since it will cause the execution time of your program to increase.

This is logical, since, by yielding execution to other events and processes, Excel temporarily halts the code execution while the operating system handles these other events or processes.

The second part of this introduction is dedicated to exploring how the DoEvents function affects performance. We’ll present some performance test results with important lessons attached to them and then we’ll show you how to balance the yielding of code execution with performance considerations.

Finally, we’ll discuss the generic applications of the DoEvents function in Excel and when not to use it in your VBA macros.

With this in mind, let’s present a very basic and nifty example of VBA DoEvents usage!

Insert the code below into a standard code module:


It’s easy to copy and paste a macro like this, but it’s harder make one on your own. To help you make macros like this, we built a free VBA Developer Kit full of pre-built macros so you can master file I/O, arrays, strings and more - grab a copy below.

In this simple procedure we use VBA to repeatedly update the value of the Application.Statusbar in the lower left corner of the Excel window inside a loop. In practical situations, if a program containing a loop takes a long time to complete it’s really helpful to track its progress that way.

The procedure starts by storing the current value of the in a Variant type variable. This is because you update the with a string, but its default value is the boolean value . This may sound strange, but otherwise it would be impossible update the the with the string “False” without setting it to its default value, “Ready”!

We also turn the screen updating off by setting to , just like we did in our Application.ScreenUpdating VBA tutorial. As will become evident in the next section, this is crucial in terms of performance!

Next, the procedure loops from 1 to 5000 and updates the at every iteration. The function in the loop enables you to interrupt the code execution. To do this, simply press Esc or Ctrl + Break. Note, however, that not all computer keyboards come with a Break button!

We’ve actually written a good tutorial explaining how to stop an Excel macro. By including VBA DoEvents, it’s easier for the system to not got bogged down so it should be better able to recognize when you’re trying to press the Esc or Ctrl + Break to end your running macro. 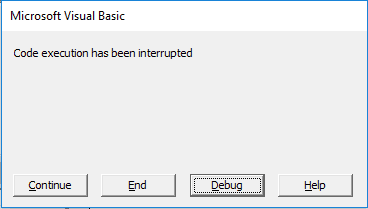 When the loop completes, the is set to its original value stored in the variable and we also set the property back to .

Okay, we’ve shown you how to include the DoEvents VBA function in your macro and how it can make it easier for you to cancel your macro. Next, let’s examine the price you pay for this increased user friendliness and control stemming from the use of the function.

It should come as no surprise that the fastest execution time (25.34s) is obtained by removing and setting to in the ShowStatusWithDoEvents procedure.

The second row in the table shows that calling the function at every iteration increases the execution time by a factor of 3.6 (91.16s / 25.34s). In other words, the performance overhead incurred by using DoEvents that way is quite substantial!

Even more conspicuous is the steep increase in execution time we observe from row 2 to row 3 (1,663.66s). This is caused by not setting the property to in the procedure. This result suggests that forgetting to do so may increase the execution time of your program by a factor of more than 18! The main takeaway from this is that, unless you have specific reasons not to do so, you should always set the to while executing your programs.

The bottom feeder in our tests is row 4 (2,658.62s), where the property was set to and was removed. It is quite surprising that including at every iteration in the loop, cf. row 3, decreases the execution time of the procedure compared to when DoEvents is removed from the procedure!

The Microsoft Developer Network documentation on the Application.ScreenUpdating property states: “Turn screen updating off to speed up your macro code. You won’t be able to see what the macro is doing, but it will run faster. “ However, it’s not entirely accurate to say that you can’t always see what the macro is doing while it’s being executed when the screen updating is turned off. When you update the status bar, you can in fact see what your macro is doing, even if you haven’t included the function in your code. That is, unless your screen freezes up. This suggests that only updates the worksheet area (i.e. the cells), rather than the entire Excel window, including the status bar. This may in turn explain the surprising result in row 4 of the table. If the repeated requests from the loop to update the screen and the status bar are conflicting with one another, this might indeed cause the procedure to run slower without the function!

Of course this is all just a theory. I’d love to hear if you all get similar results in your tests!

The obvious solution to decreased performance caused by the function is to only call it intermittently in the loop. This can easily be achieved by using the VBA Mod operator like this:

The line of code above tells Excel only to call DoEvents at every tenth iteration. This decreases the total execution time of the macro tested in row 2 of the table from 91.16s to only 29.67s and you can still interrupt the code execution. A no-brainer!

Finally, let’s discuss the generic applications of the VBA DoEvents function and, just as importantly, when not to use it!

Broadly speaking, there are two main reasons for using the function:

The DoEvents function should not always be used in your procedures, though. For most “lightweight” procedures with short execution time, this function is entirely unnecessary. Moreover, if performance is key and your code has been thoroughly tested, you may want to leave DoEvents out of your code, even if the execution time is substantial. In that case, the benefits described above may be outweighed by the price of using it.

The choice is yours!

If you haven’t already done so, please subscribe to my free wellsrPRO VBA Training Program. What are you waiting for? You’ll love the great VBA content I send your way!

Attention VBA Geeks!
I see people struggling with Excel every day and I want to help. That's why I'm giving away my VBA Developer's Kit for free. It's full of shortcuts, tips and pre-built macros to help you become a smarter programmer.

Grab a copy of our VBA Developer's Kit and start writing better macros in half the time.