Use VBA ThisWorkbook event handling to capture a variety of application-level events. The events captured in the VBA ThisWorkbook module can be used to trigger unique actions based on a user’s interaction with Excel.

In this context, an event is an action or occurrence recognized by Excel that may be handled by it. This will make more sense in a few minutes.

Excel events can either be triggered by Excel, by the user or by third-party applications. An event handler, therefore, is a callback subroutine that handles inputs pertaining to an event in a program. This, in turn, allows the programmer to check for certain desired states before either allowing, halting or altering further code execution and/or other events.

Don’t worry if this all sounds a bit abstract and technical to you at this stage. You’ll have a very clear understanding of what Excel events and Excel event handlers are when you’re finished reading this tutorial.

VBA events and their corresponding event handlers can be grouped into three main categories:

Excel VBA is normally characterized as an event-driven language, as it comes with a huge range of built-in objects and controls capable of handling events. We’ll focus solely on Workbook event handlers in this tutorial, which are handled via the ThisWorkbook module in your VBA editor. We may write about other types of VBA events in future tutorials. Let us know in the comments if you want to hear more about other VBA event handlers!

Let’s start by outlining what a generic VBA event handler (callback subroutine) looks like and how it works!

The code below is pseudo-code and only serves to illustrate how a VBA event handler (event callback subroutine) is structured and works:

On the surface, this looks like any other type of subroutine that takes parameters and allows you to execute your own code within it, but it’s not! Since event handlers are predefined by Excel, they only work when certain conditions are made.

If you do not specify the parameters exactly as Excel expects, you’ll get an error message (like the one below) either when the subroutine is executed or when you compile your code (with Debug > Compile VBAProject in the Visual Basic Editor):

Secondly, the parameters passed to the subroutine are passed by Excel and not by some other code you’re using.

Thirdly, you cannot change the name of the event handler without breaking it! If you do change the name, Excel won’t know which event you’re trying to handle, and your subroutine will then simply be treated like any other subroutine, rather than as an event handler. Event handler names are predefined by Excel, so they won’t be recognized if you try to make changes to the names.

Fourthly, the (pseudo-)event handler above is declared as a Private sub. Amongst other things, this ensures that it doesn’t appear in the Macros Dialog Box when you type Alt+F8: 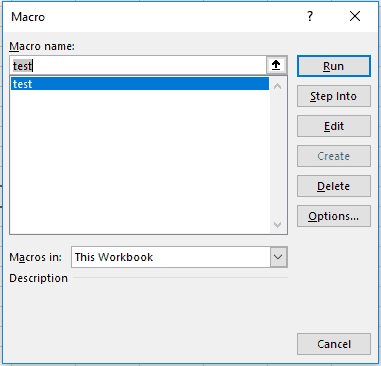 Any subroutine with a parameter won’t appear in the Macros Dialog Box, unless the parameter is an Optional Variant type variable. However, not all event handlers come with parameters, so for consistency they are all declared Private by default.

Finally, it should be noted that if a parameter to the event handler is not declared as a ByVal (“by value”) variable, it means you can change its value within the scope of the procedure. Event handlers are no different from ordinary subroutines in this respect, except that altering a non-ByVal or ByRef (“by reference”) parameter typically enables you to control whether a specific Excel event is carried out or not. In VBA the name of this parameter is usually Cancel.

You’ll understand exactly what we mean by this when we step through the event handlers of the Workbook object, but before we get to that, let’s show you how to set up an Excel workbook event handler using VBA.

Setting up a Workbook event handler

Open a Workbook, type Alt+F11 and double click on ThisWorkbook in your Project Explorer (Ctrl+R).

You’re now ready to start working with all the Excel Workbook events. We’ll give you a rundown of all the Excel workbook event handlers in the next section, each of which can be used to trigger actions in your VBA macros.

Below is a complete list of Workbook event handlers in Excel. You can use it later as a reference when you’re coding your own event handling procedures, but for now a more cursory reading will do. I encourage you to browse through the list, stop whenever you find a procedure that interests you and then read the info on that specific workbook event.

Some of these event handlers are somewhat esoteric and only very rarely used, whereas others are much more common. In the next section, we’ll present some code examples for a couple of the more commonly used event handlers.

Paste the code below into the ThisWorkbook code module:

The event handlers above become active immediately after you paste the code into the module, provided is set to True.

Test the first by selecting a cell in range in column A on any of the worksheets in your workbook.

Anyway, once a new cell is selected in the target range, a message like the one below should then appear:

If it doesn’t, try typing Application.EnableEvents = True in the Immediate window of the Visual Basic Editor and then press Enter.

In the event handling procedure above, we’ve narrowed down the handled worksheet area (cell range) with the following piece of code: If Not Intersect(Sh.Range("A1:A10"), Target) Is Nothing Then

This means the code inside the conditional statement above is only executed if range of the active sheet and the range of the cell in which the selection change was made intersect or “overlap.” In other words, the message box will only appear if the selection change was made in range . A similar code can be placed in many of the other event handler macros to restrict your macro from running unless certain cells are triggered.

In the second code example, we check for calculations performed on any sheet in the workbook. For instance, try entering a simple formula such as “=2+3” into any cell of your workbook and press enter. A message like the one below should now appear:

Since the built-in Excel event handler only returns the corresponding sheet object, there is no easy way to determine in which range(s) of the worksheet the calculation(s) occurred, so we simply display a message with the name of the worksheet instead.

Even though event handling is a wonderful thing which can make your life a lot easier, improve the user experience and make your applications much more powerful, some words of caution are in order.