You should declare constants in your VBA project when you need a value defined and you know the value won’t change. I often find myself using VBA constants when working with scientific equations. To declare constants, you use the VBA Const and Public Const statements. Recall that you typically declare variables using Dim statements, instead.

There are 3 ways to declare a constant in VBA. Each method has a different scope. The first method only makes the constant available in the procedure (subroutine or function) where it’s declared. These are called procedure level constants.

The second method lets you access the constant from any procedure within a single module. That’s why these constants are called module level constants.

The final method makes the constant available in all modules and procedures in your entire workbook. Constants with this highest level of scope are called project level constants.

Procedure level constants in VBA are declared inside your procedure using the Const keyword. The general syntax is Const Name as Type = Value where is the name of your constant, is the data type you want to declare and is the value you want to assign to the constant. Let’s walk through an example.

In this example, we declare a constant, , representing the constant acceleration of gravity as 9.80665 m/s2. Notice the placement of the Const declaration. It’s inside the procedure. By declaring the constant inside our routine, we’re making it so the value stored in cannot be accessed in any other routine.

If you try to reference the constant from another subroutine or function, even one located inside the same module, it won’t have a value. That means you’re allowed to define multiple procedure level constants with the same name and different values as long as they’re in different procedures. Take this code, for example:

Even though both constants are named , you’re able to store different strings in them because they’re both procedure level constants. They only retain their value inside the procedure they were created in.

Notice the Const declaration was placed at the top of your module. It’s declared outside of any subroutine or function. This is the key for module level constants. Declarations must be made at the top of your module and must not be inside a procedure. Once you do that, you can access the constant from any procedure (subroutine or function) in that module.

In this example, we used Einstein’s famous E=mc2 special relativity formula to calculate the energy of an object with two different masses. We succesfully referenced the speed of light constant, , in both subroutines.

You can start to see the appeal of using constants with this example. You don’t want to accidentally change the value of when accessing it in different procedures! That’s the risk you’d run into if you had declared it as a variable.

Project level constants can be accessed by any subroutine or function inside your workbook, even if they’re in different modules. This is going to be a fun scientific example so stick with me. Let’s say you have a module named and a module named . You can see both of our modules in this screenshot from our Project Explorer Pane.

In the module, you’ll declare a project level constant using the Public Const declaration. This module will allow you to calculate the energy of an object based on its mass.

The Public keyword is the secret to making your constants usable across multiple modules.

Even though we never defined the speed of light constant, , in this module, our subroutine successfully calculates the energy as 3.78370639456939E-19 Joules. It’s able to do this with the help of our Public Const declaration in our module.

On a related note, the code above illustrates how you can use formulas to define constants, as long as your formulas don’t contain any variables.

This section covers a couple common issues people encounter when working with VBA constants. Read it carefully to avoid making the same errors on your project.

Unlike variables, you must set a constant equal to a value when declaring it. If you don’t set your constant to a value using the equal sign during your declaration, the declaration line will turn red and you’ll get a compile error reminding you the code was expecting an equal (=) sign: 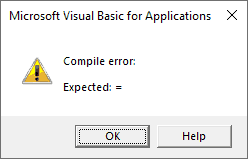 Once a constant is declared in VBA, you cannot change its value. If you try to change the value stored in a constant, you’ll get a compile error stating “assignment to constant not permitted.” 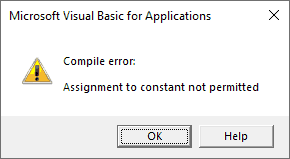 We just got done saying once a constant is declared in VBA, you can’t change its value. While that’s true, it’s worth noting that even module and project level constants can be overwritten by procedure level constants. For example:

Even though we already have a module level constant, , defined with a constant value of “Red”, the macro declares a new constant with the same name. It doesn’t treat this as a duplicate declaration. Instead of generating an “ambiguous name detected” error, when you run this macro, “Yellow” is printed to the VBA Immediate Window.

If you were to run the macro, though, it would print the value stored in the module level constant (“Red”).

Unfortunately, you’re not allowed to declare public constants inside object modules, like or . For example, let’s say you’re working on a VBA project in Excel. Trying to declare a Public Const inside any object module listed under the “Microsoft Excel Objects” group in your Project Explorer will create the following compile error:

We’ve used a couple scientific equations to illustrate when you might find it beneficial to declare constants in your VBA project. We showed you the difference between Const and Public Const and how placing your constant declarations in different spots can impact how you’re able to use your constants. We also explained a couple common errors people encounter when working with constants, including how once a constant is assigned a value, you cannot change it’s value later. That’s what variables are for!