When you’re writing multiple subroutines or functions, you often need to send data between them. You do this by adding parameters, or variables, in your subroutine declaration, but what if the sending subroutine doesn’t know what value to pass? In that case, you can make the parameter optional. When you use optional parameters, it’s important for you to check whether the optional parameter has been passed to avoid breaking your code.

One of the easiest ways to check whether an optional parameter has been supplied is to use the built-in VBA IsMissing function. Let’s take a look at this function now.

Note: All mentions of a subroutine can be interchanged with a function throughout this tutorial.

For a subroutine to receive a parameter from another subroutine, it simply needs to say so in its declaration line:

In this code sample, the user can decide whether or not to pass the parameter , and the Intellisense popup shows the variable in square brackets []. VBA uses square brackets to indicate that a parameter is optional. If we were to remove the Optional tag, would always require the argument be passed. In this case, you would receive an error if you didn’t supply a variable when calling .

In some cases, passing a variable may not be desirable or even possible. However, it is redundant to rewrite the entire code block for a case where the variable cannot be passed, and therefore we employ the use of the Optional tag to cover both situations.

This will print Error 448 to the Immediate Window, which means the argument, or variable, was not found. Indeed, looking at the Locals window (View > Locals Window in the VBE), you can see that is a Variant/Error data type and the value column is listed as Missing: 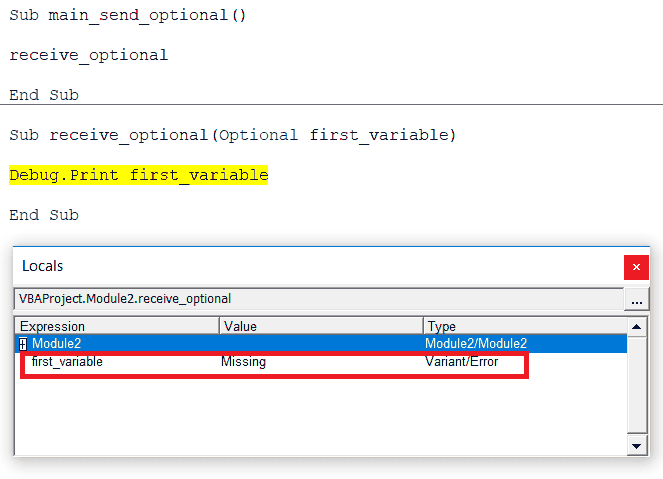 
There’s a lot to unpack here. To save time and become really good at VBA, make sure you get our free VBA Developer Kit below. It’s full of tips and pre-built macros to make writing VBA easier.

This is an important point, so let’s talk about it a bit more.

Only accurate with Variants

If you declare the optional variable as any data type other than Variant, IsMissing will be FALSE, even if no variable is passed into the receiving subroutine. This is because the dimensioning in the declaration line initializes the optional variable into that data type, assigning the data type’s default value. Thus the variable has some value and therefore it is not actually missing.

This demo explains what I mean:

When the subroutine makes its call statement, the subroutine will print 0 in the Immediate Window. That’s because the parameter is initialized as an Integer as soon as the subroutine begins, and the default value for an integer is zero. Dimensioning as a String will result in an initial value of "", an empty string. The variable exists for that subroutine, and it is assigned a value. Thus, IsMissing can only detect whether a variable has not been passed if that variable is typed as a Variant.

Don’t forget this behavior, because it can cause errors that become very frustrating to find. Data type issues are easy to overlook when debugging, sending you on a 2-hour bug chase that ends up with a facepalm when you finally read the subroutine declaration.

Developers often use IsMissing to avoid Type Mismatch errors and to prevent inaccurate data from invalidating results. In the latter case, if your subroutine needs data and it is missing, the code may still run, but the outcome will be wrong.

Many developers rightfully like to specify data types for their passed arguments to enforce code integrity (for example, integers are always added to integers to avoid strange, automatic data type conversions). If you like to enforce data types, you won’t be able to use IsMissing to check for missing variables because the function only works with Variants.

To circumvent the issue, use default values. These will automatically be assigned to any missing optional variables. You basically just need to set defaults that are so abstract that a user wouldn’t realistically pass those parameters to your subroutines. Consider the follow line of code:

This line enforces data type integrity, but it also applies a specific value by default. If you know your data ranges, you can use this knowledge to construct your own IsMissing alternative, like this

As long as your passed values will always be positive, and as long as the default string will not be real data, you can now enforce data type integrity and check whether a parameter was passed.

Let’s look at a situation where you would actually use the IsMissing function to check whether a variable was passed or not.

Let’s say your user can enter dimensions on a spreadsheet and get the area of a 2D object or volume of a 3D object. For sake of simplicity, let’s also assume these shapes are all rectangles or rectangular prisms.

A user-input table to determine area or volume of object

You can use the missing cells to determine whether to output area or volume:

Running the subroutine will yield this final table on the spreadsheet:

The above table filled with volume or area and the result

If you inspect in the function, you can see it is passed as a Variant and appears Missing if nothing is passed. That’s why the VBA IsMissing function is an appropriate tool for telling the whether or not the parameter was passed. A more robust function would need to check if the passed parameters are numeric using the VBA IsNumeric function, and you could even convert the subroutine to its own UDF if you wanted to call formulas directly from your spreadsheet.

Using the IsMissing function in your VBA macros is relatively straightforward. The important thing to remember is that it only accurately checks whether a variable was not passed if the parameter is a variant (the default if no data type is specified in the declaration line). If all optional variables are specified with a data type in the declaration line, they will be set to their respective default values at initialization, causing IsMissing to correctly but misleadingly return FALSE.

If you are adamant about enforcing data type integrity, consider writing your own missing variable checks. Make sure to run some quality assurance tests, too, because users are known to add all sorts of strange inputs that could trip up macros that aren’t robust.

That’s all for today’s tutorial. Fill out the form below and we’ll share our best time-saving VBA tips.

Oh, and if you have a question, post it in our VBA Q&A community.

The best free VBA training on the web
I see people struggling with Excel every day and I want to help. That's why I'm giving away my 90-days to Master VBA eCourse and my entire personal macro library for free.

Over 2 million people use our VBA tutorials each year to help automate their work. Are you ready to reclaim your time, too? Grab our VBA Cheat Sheets and you'll be writing macros like a professional. With over 180 tips and 135 macro examples, they include everything you need to know to become a great VBA programmer.

This article was written by Cory Sarver, a contributing writer for The VBA Tutorials Blog.

Join our free 90-day VBA Training Program and start building your reputation as an office innovator.