This isn’t the first time you’ve seen me use IsNumeric in my VBA macros, but in this tutorial I’ll explain how it’s used and what it’s good for. Let’s get started.

The syntax for the IsNumeric function can’t get any simpler:

As you can see, IsNumeric accepts one argument: an expression of the Variant Data Type. I know, I know. The complicated jargon isn’t necessary.

All you need to know is that IsNumeric can pretty much evaluate anything. A cell, a string, a date, a range. It won’t choke up on any of these, but that doesn’t mean it’ll give you the answer you want.

For example, if you enter a range, like , into an IsNumeric expression, it will always return False even if all the values in the range ARE numeric. The IsNumeric function won’t loop through each cell in your range and check whether each of them are numeric. You’ll have to do that with a loop of your own, like a For Each loop. I’ll show you a macro that does that in the IsNumeric Examples section.

Because IsNumeric returns True or False, it’s a great expression to include inside If Statements. Let’s take a look at a couple examples.

Check if a Cell is a Number

You don’t need to put the = True in the above If Statement, but I included it to make the macro easier to read.

Check if All Cells in a Range are Numeric

The above macro checks each cell in your range and the moment it finds one that isn’t numeric, it exits the For Each loop and lets you know there are non-numeric cells in the range.

As a programmer, you can perform different actions based on whether the entire range is numeric or not. Checks like this one give you more control over how you handle errors.

To test how the IsNumeric VBA and the ISNUMBER Excel functions behave, we’re going to make a User Defined Function (UDF) to evaluate the following cells in Column A: 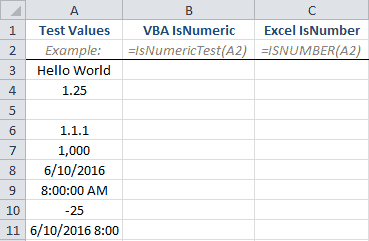 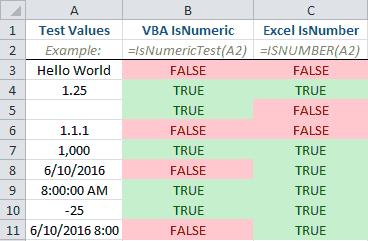 By looking at the comparison image, you can see the VBA IsNumeric function considers empty cells numeric, but the Excel ISNUMBER function does not. That’s why I said earlier that it’s a good VBA practice to check if your cell is empty by using the IsEmpty function when you use the IsNumeric function.

Another difference you can see is in how the two functions treat dates and times. IsNumeric VBA says times are numbers, but dates are not. It also says the combination of dates and times are not numeric. ISNUMBER, on the other hand, says all 3 date/time cells are numeric.

Congratulations! You’re now an IsNumeric expert! You certainly know more about IsNumeric than the average Excel user, and for that you should be excited.

IsNumeric is a great VBA function, but, as you’ve seen, you have to be careful when using it if there’s a chance your input may be blank or if you’re evaluating dates and times.