Throughout these tutorials, you may have noticed that Python seems to lack some fundamental operations. We learned that ** exponentiates a number, but what operation takes the square root? Python can find the minimum and maximum of a list, but how can we find the mean? Built-in Python doesn’t contain everything we need to perform all of the operations we want to perform. We can create functions and loops to replicate those missing operations, but recreating those functions every time we want to use them would be tedious and time-consuming. To solve this issue, we can use modules.

So far in our tutorials, we have been executing Python code from the terminal. All variables, objects, and output not saved to the disk will be erased after the terminal is closed. In this tutorial, we will explore the primary method of saving, using, and importing Python code between script executions. These saved Python scripts are called “modules,” which are used extensively in Python. Python modules not only save code for later execution, but are also used to import variables, functions, and class objects.

We mentioned in our Getting Started tutorial that Python modules are saved with the .py suffix. For example, we can save the following Python code with the name example.py:

Now we can execute this script from the command line terminal with the following:

Python modules don’t only have to be executed as scripts: they can be used to import objects. There are a few methods we can use to import objects from a module, the simplest of which is the import [module] statement. For example, suppose we save the following code as example.py:

Now we can open a new script or terminal to import the module. When the module is imported into Python, its objects are referenced like object attributes with the module.object format. Now we can import the above example.py module and execute the addup function:

An alternative method for importing a module is the import [module] as [name] format, which will allow you to reference the module as [name] instead of its original name. This is useful for coding with modules that contain long or confusing names. For example:

If we wish to only import a selection of objects from a module, we can use the from [module] import [objects] format, where [objects] is a tuple of object names. If this method is used, only the named objects will be imported instead of the entire module. This effectively instantiates the objects within the current Python session, and allows the objects to be referenced directly. For example,

We can use a single asterisk * to tell Python to import all1 the objects contained within a module:

Note: It is considered bad form to blindly import all objects from a module, as it can lead to variable naming collisions and take an unnecessary amount of memory. You should only use the import * statement if you are familiar with the module and its objects prior to use.

We can combine the selection import statement with the as statement to rename the objects:

Module Search Path, or "Where is my Module?!"

To beginners of Python, there is a very common and frustrating error that is associated with importing modules:

As you may guess from the description, this exception is raised because Python cannot find the module you wish to import. Python searches for modules in the following order:

If the ModuleNotFoundError is raised, then Python could not find the module in these three locations. We can examine which directories are listed in the sys.path object by importing the built-in sys module and printing the sys.path list:

I’ve omitted the actual list of path strings in the above example, as they vary between environments. If we want to add a directory for Python to check for modules, it’s as simple as appending a new string containing the path to the sys.path list:

The dir function operates on modules similar to how it works on objects as we mentioned in the previous tutorial. The dir([module]) function will list the objects available for reference within the given module.

Vanilla installations of Python come with several built-in modules that contain useful tools for basic operations. This tutorial won’t cover all the built-in modules, but we will cover a few of the basics. Python modules involved in file input and output will be discussed in a later tutorial devoted to input/output.

As you might guess, the math module provides a set of mathematical constants and functions, and the statistics module likewise provides statistical resources. For example:

The os module provides a set of functions for interacting with the operating system. The following is a list of some of the functions contained within the os module.

Examples and further use of these functions will be expanded upon in a future tutorial.

The sys module contains functions for interacting with and changing the current instance of the Python interpreter. This is used to change the default behavior of Python, and to provide additional technical information. We have seen previously that this module contains the sys.path list that Python uses to find modules. The vast majority of the sys module is outside the scope of an introductory tutorial, however you should know what this module is and what it’s used for.

The random module is used to generate pseudo-random numbers for the use of non-deterministic algorithms.

One of Python’s most powerful features is its support by the Python community. Thousands of Python modules are available for open-source usage that perform an endless number of functions. In this tutorial I’ll introduce a few of the most important and well known of these open-source modules. Each of these packages can take entire courses to master, therefore I’ll only perform a high-level review of each.

The scipy module is available from SciPy.org. SciPy implements a library of numeric functions for scientific computing. These functions include methods for numeric integration, linear algebra, and other special functions. Most IDEs such as Anaconda will include SciPy and its collection of core packages, however it will need to be downloaded for use in vanilla Python.

The numpy module is available from NumPy.org as a core package of SciPy. As we mentioned before in our tutorial on data structures, NumPy provides a data structure for implementing arrays. NumPy also provides a suite of mathematic operations. For example,

The matplotlib module is available from the Matplotlib Page as another core package of SciPy. matplotlib is a toolbox for creating vector graphic plots. For example, we can create a simple plot using matplotlib sub-package pyplot with the following code: 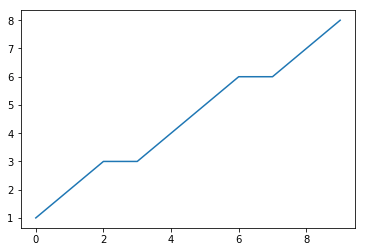 The matplotlib contains an enormous number of features for plotting, saving, and updating graphs. Further details on using matplotlib will be covered in later tutorials.

The pandas module is available from the Pandas Page as another core package of SciPy. pandas contains functions and data structures used for data analysis. Similar to how numpy implements arrays, pandas implements data frames with associated operations. Pandas is an extensive package that is heavily used in the data science and analytics industry.

For example, we can define an random data frame for analysis:

Lets look back at our previous geography teacher example that we used in the tutorial on Class Objects. In the previous tutorial we defined a class object geographyStudent using the following code:

This was a somewhat bulky piece of code, and if we had hundreds of students then we would have to copy a significant amount of code each time we wanted to perform an analysis. Let’s save the above code to a module called students.py. Now, we can import and use the student objects:

Now we can use the statistics package to compute some statistics of the students’ grades:

We can also use the matplotlib to plot the grades: 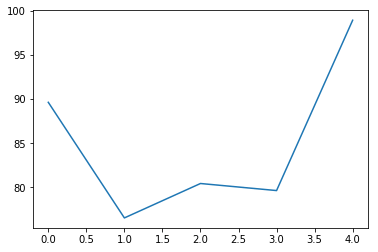 1. This can be performed with the following:

2. This can be performed with the following: 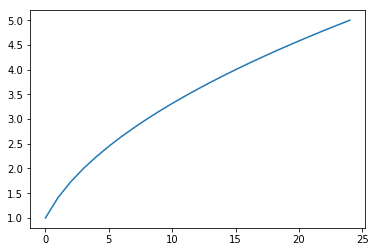 4. We can apply the shuffle function to the string by first transforming it into a list of characters:

5. To solve this problem, you will need to lookup the documentation for the fraction module and understand its functionality. We can convert the number to a fraction using the Fraction object: