In this article, we’ll build on the concepts explained in those tutorials, and we’ll explain how you can detect objects from live feeds, like cameras and webcams using the same YOLO algorithm. Just like last time, we’ll be using the YOLO implementation from Python’s imageai library for object detection.

We’ll need to first install the following libraries required to execute scripts in this tutorial.

In this section, we’ll show you how you can detect objects from live webcam streams and simultaneously display the detected objects.

To do so, you need to perform the following steps. These steps are very similar to the steps we used when detecting objects from images.

Step 1: Creating an Object of the Object Detection Class

The script below creates an object of the object detection class.

The next step is to set the model type for object detection. Since we’ll be using the YOLO algorithm, you need to call the setModelTypeAsYOLOv3() method as shown in the script below:

The next step is to load the actual Yolo model. The Yolo model the imageai library uses for object detection is available at the following Github Link. Download the model from the above link.

The next step is to capture your webcam stream. To do so, execute the script below:

Next, you need to define height and width for the frame that will display the detected objects from your live feed. Execute the following script to do so, recognizing you can change the integer values near the end to match your desired dimensions:

You are now ready to detect objects from your live webcam stream. We’re going to show what appears to be a complicated script below so let me explain it first. The script executes a while loop. Inside the while loop, the read() method from the object returned by the VideoCapture() reads the next frame captured by the webcam.

The frame returned by the detectObjectsFromImage() method is then passed to the imshow() method of the OpenCV module which displays the current frame containing our detected objects. This is what shows each frame of your video on your screen in real-time. The process continues until you press the “q” or “ESC” key on your keyboard.

Once you execute the script above, a window will appear displaying the live video feed from your webcam, along with the objects detected in each frame. Here’s a screenshot of output for your reference. 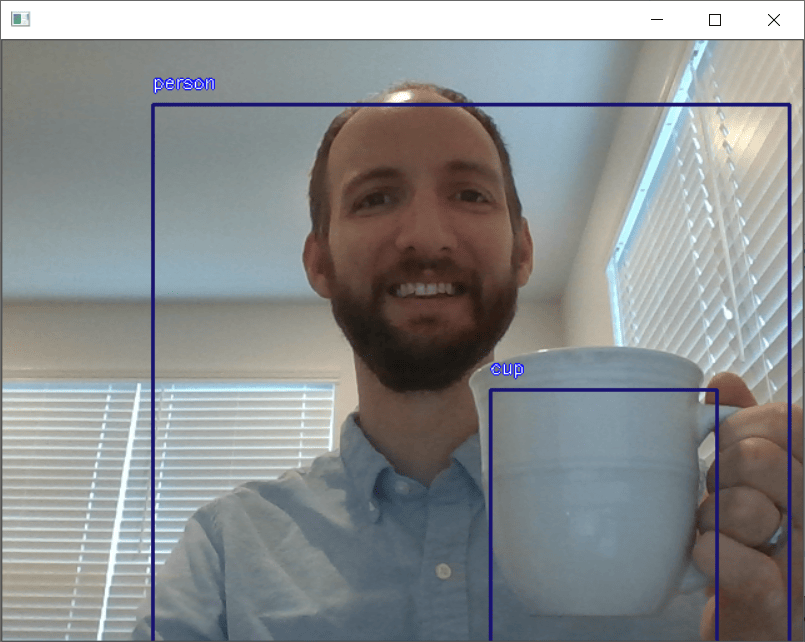 You can see from the output that a person and a cup were successfully detected.

Save Detected Objects from Webcam Streams in a Video File

In addition to detecting and displaying objects from live feeds, like webcams, in window frames, you can also save objects detected from live feeds to a video file.

This process is very similar to the steps we took when applying YOLO to videos in our tutorial explaining how to detect objects from videos. The only major difference is that instead of passing the path of the input video file to the attribute of the detectObjectsFromVideo() method explained in that tutorial, you need to pass the object that captures live camera feed to the field.

The first step is to import the VideoObjectDetection class, like this:

The script below creates an object of the VideoObjectDetection class:

Next, you have to set the model type for object detection from videos, just like you did in the last section.

The following script sets the path to the YOLO model and loads the model.

Step 3: Detecting Objects from Camera and Saving to Video File

Here you can see that the only change from the script we used to detect objects from videos is the presence of the attribute whose value is equal to the camera object that captures your webcam stream. Also, the attribute is set to 3 which means that the function detectObjectsFromVideo() will terminate after detecting objects for 3 seconds from your input camera stream.

Once you run the script above, you will see that a video file named output_video.avi will be stored at the path specified by the “output_file_path” attribute. If you run the video, you’ll see that it contains annotated objects. We set our frames per second to 15, but you can bump it up closer to 30 if you’d like.

Object detection with Python is really a lot of fun and there are so many ways to do it. Tensorflow, pyTorch and OpenCV all allow you to detect objects in images and videos. Whichever method you use, object detection opens up a wide range of real-world applications. For example, with live video object detection, you can detect eagles as they approach wind turbines and slow the rotation of the blades. There are thousands of use cases for live stream object detection. If you want to know more about Python object detection, subscribe using the form below!

« Understanding Polymorphism in Python with Examples
Understanding *args and **kwargs Arguments in Python »
This article was written by Usman Malik, contributing writer for The Python Tutorials Blog.