Supervised machine learning algorithms are further divided into classification and regression models. In regression models, the goal is to predict a continuous value like the price of a house or the score of a student on a particular exam. In classification models, the task is to predict one of the several predefined labels for a record. For instance, whether or not a tumor is malignant or whether or not a bank note is fake. We’ve talked about using TensorFlow 2.0 for both regression and classification tasks before, but this tutorial will be a little different. I encourage you to read these tutorials before diving into this one, since they give some good background on general machine learning terms, like batch size and epochs.

In this tutorial, we’ll show you examples for solving classification problems with Python’s Scikit-learn library which is one of the most commonly used libraries for machine learning in Python.

Before we proceed further, we need to install the Python libraries needed to run the scripts in this tutorial. Execute the following commands on your terminal to download the required libraries.

In our first task, we’ll predict customer churn based on several attributes such as the customer’s location, credit card history, and bank balance.

Before importing our dataset, execute the following script to import the libraries required to handle the dataset in Python.

The dataset for this problem can be downloaded freely from this kaggle link. Download the dataset locally and then execute the following command to load the data into your Python application. You’ll need to update the file path to match where you saved your file.

The output shows that the dataset has 14 columns. Based on the first 13 columns, we have to predict the value in the exited column i.e. whether or not the customer will exit the bank within 6 months after the data for the first 13 columns is recorded.

Some of the columns in our dataset are totally random and do not help us indicate whether or not a customer will leave the bank. For instance, the RowNumber, CustomerId and Surname columns do not play any part in a customer’s decision to churn or stay with a bank. Let’s remove these three columns from our dataset.

Algorithms in Scikit-learn library work with numerical features. Some of the features in our dataset are categorical, like Geography and Gender which contain textual data. To convert textual features into numeric features, we can use the one-hot encoding technique. In one-hot encoding, a new column is created for each unique value in the original column. The integer 1 is added to one of the new columns that corresponds to the original value. In the remaining columns 0s are added. This is best explained with the help of an example.

Let’s first remove the categorical columns Geography and Gender from our dataset and create a without these columns.

Next, let’s use Pandas get_dummies()method to convert the categorical columns into numeric columns. Look at the following script.

The above script prints the newly one-hot encoded columns for the original Geography and Gender columns. Here’s what the output for Geography looks like: 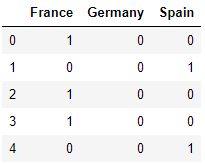 The output shows that 1 has been added in the column for France in the first row, while the Germany and Spain columns contain 0. This is because in the original Geography column, the first row contained France.

Now we’re going to take these new columns and add them to our where we dropped the original Geography and Gender columns.

Dividing the Data into Training and Test Sets

From here, we can further divide our data into training and test sets:

Once the model is trained, you can use a variety of evaluation metrics to measure the algorithm’s performance on your test set. Some of the most commonly used measures are accuracy, confusion matrix, precision, recall and F1. The following script calculates these values for our model when the model is evaluated on our test set.

The output shows that our model achieves an accuracy of 86.95% on the test set which is pretty good.

In the next section, you will see another example of how to perform classification with Python’s Scikit-learn library.

Knowing how good a car is before you make a purchase decision can save you lots of pain in the future. Believe it or not, machine learning can help you here, too. We can develop a machine learning algorithm capable of predicting a car’s condition based on several attributes such as buying price, maintenance price, number of doors, seating capacity etc. All you need is some historical data of cars with such attributes.

The dataset for this problem is available at this GitHub link.

Let’s import the dataset and print its first five rows.

The dataset has 7 columns. Based on the first 6 columns, our task is to predict the car condition which can either be unacc (unacceptable), acc (acceptable), good and vgood (very good).

Let’s first check the type of all the columns.

All the columns in our dataset are of type objects. We need to convert the feature set into numeric data as we did in the case of bank customer churn. Just like before, we’re going to use one-hot encoding again to do this. The following script removes the categorical feature columns from our dataset and stores the condensed dataset in .

Now, if you look at the one-hot encoded safety column, you should see the following output. 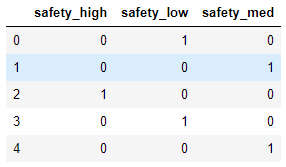 The final dataset can be created by concatenating the one-hot encoded columns with our condensed dataset where we removed the categorical columns, .

The remaining steps are similar to our bank customer churn problem. We first divide our data into the features and labels set.

And then we can divide our data into the training and test set as shown below:

We can again train our algorithm (model) using the RandomForestClassifier class from the sklearn.ensemble module as shown below:

The output shows that our model is 95.95% accurate while making predictions on the test set, which is an extremely excellent result. This model can now be used to evaluate the condition of other cars with approximately 96% accuracy.