To illustrate creating density plots, we will assume we have the following DataFrame df containing test grades already available within our Python environment. You may recall this is the same data set we used to create histograms in our previous tutorial on creating histograms with Pandas.

Here we have two features, Test_1 and Test_2, along with a group number for each test given by the feature Type1.

If we would like to create a fast and simple density plot for exploratory analysis, we can use the pandas.DataFrame.plot.kde method directly: 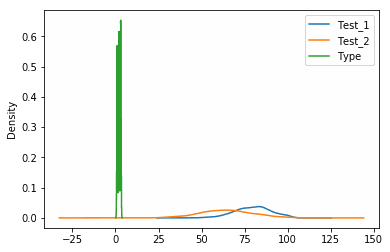 While this method is simple and straight-forward for exploratory analysis, it will plot all features including the Type column, which is meaningless for our purposes. To produce a more meaningful figure, we’re going to look at plotting individual features and modifying the KDE internal calculations.

Recall that we can slice DataFrames with DataFrame[slice] where is an iterator of column names or column position integers. 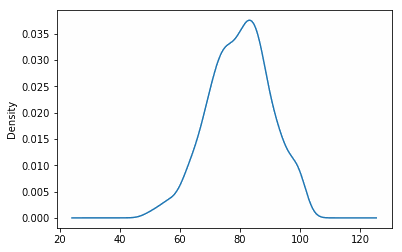 In kernel density estimation, the bandwidth is a parameter that specifies the level of smoothing applied to the curve. Higher values of the bandwidth will generate smoother curves, while lower values will produce more jagged but higher resolution curves. The choice of this parameter depends on the application on which you are working, however full analysis of a data distribution would use multiple values to ensure that both minor trends are not overlooked and noise in the data is not over-exaggerated.

The bandwidth parameter is set with the bw_method option. Let look at plotting several different values of bandwidth: 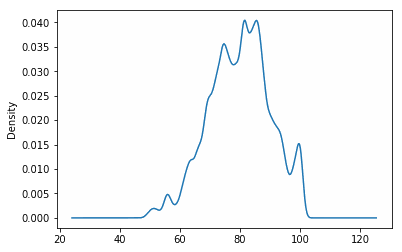 We can see from above that as we shrink the bandwidth, more noise is incorporated into the density plot. The bandwidth can be thought of as a continuous form of a histogram’s bin size and can be adjusted in a similar fashion.

To plot multiple features in a single density plot, we’ll have to slice the DataFrame prior to calling the plotting feature - just like we did in the previous section. To show what we mean, we’re going to plot both the and features of our DataFrame: 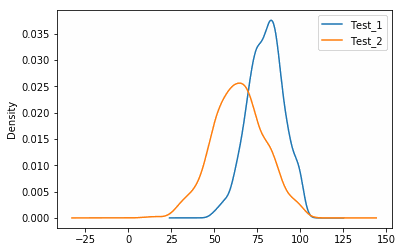 Because KDE curves are commonly associated with histograms, it is not uncommon to see them plotted together as a histogram with its “smoothed” equivalent. To plot both density plots and histograms on the diagram, we can call pandas.DataFrame.plot.hist followed by pandas.DataFrame.plot.kde. However, if we call these functions consecutively, we will see what appears to be erroneous results since the scales of the two figures are so different: 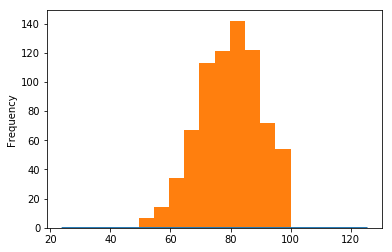 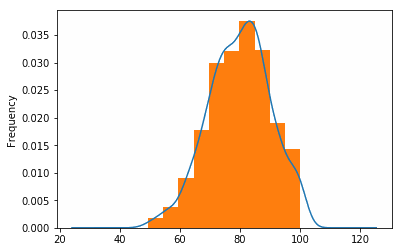 Did you find this free tutorial helpful? You can find more great Python tips and tutorials by subscribing to our systematic Python training program below. Not ready to join? Share this article with your friends, classmates, and coworkers on Facebook and Twitter, instead! When you spread the word on social media, you’re helping us grow so we can continue to provide free tutorials like this one for people around the world.

« Importing a SQL Data Query into a Pandas DataFrame
Create Pandas Boxplots with DataFrames »
This article was written by Cody Gilbert, contributing writer for The Python Tutorials Blog.