Did you know you could control your mouse with a VBA macro? Among other things, the user32 library (user32.dll) allows you to right-click, left-click and change your cursor position. Keep reading to find out how you can use mouse controls to create hands-free MS Paint art.

This article teaches you how to programmatically control your mouse with VBA. Instead of controlling your mouse manually, would you like to record your mouse and have your recording instantly converted to a VBA macro? I made an Excel add-in for that. Check out Mouse to Macro - it'll save you hours of programming!

How to automatically create your own skyline art

Want to create a city skyline? Follow these steps to create your own art:

Here’s the skyline art that was created when I ran my macro. 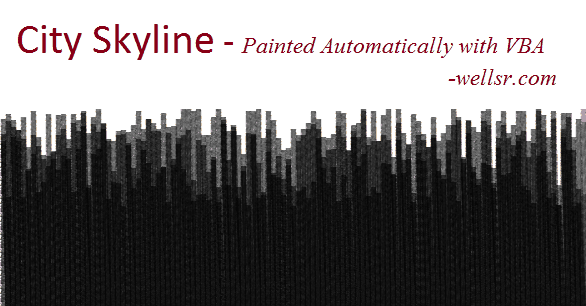 Looks like a big city, eh? The beauty of this macro is that the heights of the buildings are random. The Step declaration Step -Int((180 - 10 + 1) * Rnd + 10) randomly moves the mouse position up from 10 pixels to 180 pixels until it’s less than 300 pixels from the top of your screen. Each time you run the macro, your skyline will be different.

Sure, that was pretty cool and all but it wasn’t very practical, was it? Here, I’ll try to explain how to move your mouse, left-click and right-click. I’ll also present some best practices regarding the Sleep function. Remember to paste the following code at the top of your module before trying these examples:

The left-click down and left-click up buttons are independent. This gives you the ability to “hold” your mouse down while you move it around, like you would to highlight text. However, if you want to left-click without the hold, paste the following subroutine into your VBA editor and call it ( Call LeftClick ) from a different subroutine:

What if you need to double-click? Just call the macro twice!

Like the left-click, the right mouse down and mouse up clicks are independent. Here’s a sample of a routine right-click event:

To control your mouse on a 64-bit machine, modify the two Public Declare statements as follows:

The Sleep line delays your code for the number of milliseconds you declare. For example, Sleep 5000 will pause your code for 5 seconds.

Without the Sleep command, your computer may not register your mouse clicks or mouse movements. In other words, Sleep makes your mouse control macros more reliable.

It’s a good idea to make sure your window will be placed in the same spot before running mouse control macros. One way to do this is to use vba to maximize your window.

Want to earn a high score on that computer game you like so much? Automate it! Whether you like it or not, I’ve used mouse control to set records on several flash-based web games. Hey, it’s funner to write a VBA code to play the game than it is to actually play some of those games!

I also use mouse controls to automate many of my routine tasks at my nuclear engineering job. A while back, I wrote a macro to open and fill out my timesheet. I just press a button and watch my computer do my work. If you need help automating your routine tasks at work, let me know and I’ll be happy to help! I’m all about increasing efficiency.

We made some cool VBA Cheat Sheets to help you write better macros. We put over 180 tips and 135 macro examples in them so they include everything you need to know to become a better VBA programmer.

The best free VBA training on the web
I see people struggling with Excel every day and I want to help. That's why I'm giving away my VBA Developer's Kit for free to our newest subscribers.

Grab a copy of our VBA Developer's Kit and start writing better macros in half the time.