If you’ve been searching for a way to make a VBA UserForm with a transparent background, you’ve finally come to the right place. In this tutorial, I’ll show you how to make the background of your UserForm transparent and I’ll illustrate how you can use these macros to make the BackColor or ForeColor of your controls transparent, too.

That’s right. It will look like the controls on your UserForm are sitting right on top of the Excel grids!

If you want to slowly fade your userform in and out instead, check out my tutorial on fading your VBA userform.


If you’re in a hurry, copy and paste the example macros above into the Code portion of your UserForm and be on your way. If you’d like a step-by-step tutorial of how to incorporate the codes above into your UserForm, scroll down to the Tutorial section.

If you made it this far, you probably already have a UserForm designed. If not, go ahead and do it now.

Since today is the 4th of July, here’s what my UserForm looks like: 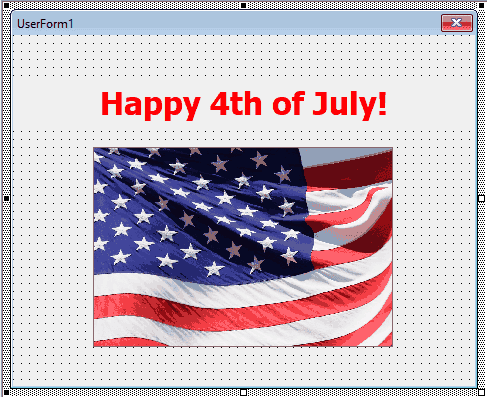 It’s a very simple UserForm. All I have in mine is a picture and a little birthday message for the United States of America.

If you want your user to be able to click around your spreadsheet while your transparent UserForm is displayed, you’ll need to set the ShowModal property of your UserForm to false.

I set up the macros so, by default, any object normally shown as white will be transparent, or clear, when the UserForm is shown. This excludes the background of the UserForm which will ALWAYS show up transparent the way I built the macros and it excludes any white that appears inside of pictures.

In my example, I want the color behind the text label to show up clear. I want it to look like the text is written right on top of the Excel cells.

To make that happen, I’ll select the label in the UserForm and set the BackColor property of the label to white, like this: 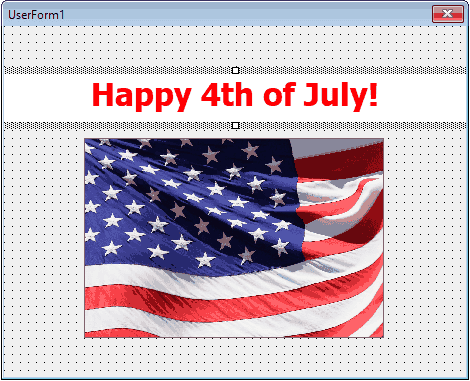 You can set the ForeColor to white and the BackColor to a different color if you want the letters themselves to look invisible.

Note: There’s a way you can change the color you want to be transparent. I’ll explain how in Step 3. This is important if you don’t want your textboxes and listboxes to automatically look clear

Once you’ve set all the controls you want to be transparent by changing their color to white, continue to Step 3.

Right-click your UserForm and select “View Code.” Copy and paste the example macro into the UserForm code block.

The most challenging part of this macro was removing the little border that appears around your UserForm. You don’t even notice it’s there, but once you make the background transparent, you’re left with a border showing the outline of your UserForm. It was very ugly!

One thing to notice is that the macro I provided will not work on a 64-bit version of Excel until you add the PtrSafe keyword after the “Declare” and before the “Function” in all the user32 declarations at the top of the macro.

Change Color You Want to be Transparent

If you already set the color of each item you want to become transparent to white, you’re all set.

If you set it to a different a color, you’ll want to find the UserForm_Activate procedure and add the color you want to become transparent as a second argument in the call statement to . For example,

The long number representing the RGB code of your transparent color can also be passed, like this:

Here’s where you get to see all your hard work pay off. Launch your UserForm! You can launch it by pressing F5 or hitting the play button in your Visual Basic Editor.

If you made a UserForm like mine, you’ll have to click the text or the flag and hit Alt-F4 to exit the form since I didn’t include an unload me button. 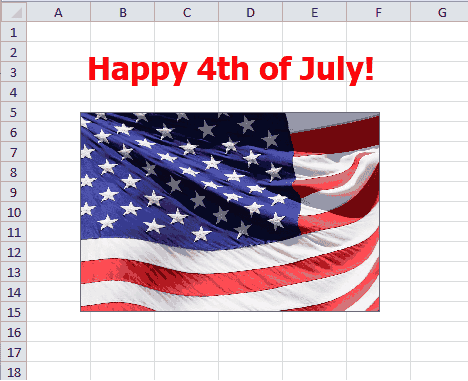 Remember earlier how I said if you set your ShowModal property to false, you can click right through the transparent portions of your UserForm? Here’s proof that I wasn’t just making that up!

I clicked right through the triangle in “4” and selected the cell beneath it. If you click directly on the red text, it selects the UserForm instead.

I don’t know how you feel, but I’m feeling pretty excited about this project! VBA is known for having such. boring. user-interfaces. The ability to make transparent backgrounds on your userforms like this lets you add just a little bit of flair to the otherwise boring world of userforms.

Try to combine this with your custom Excel Splash Screens and share your results with me in the comments section!

Happy 4th of July, everybody! I hope you all have a wonderful Independence Day!

This tutorial was a fun one to put together. I sincerely hope you’ll share the forms you create with me in the comments section.

When you’re ready to take your VBA to the next level, subscribe using the form below.