Fade your VBA UserForm in and out with the macros in this tutorial. This VBA tutorial will also teach you how to force your userform to appear partially transparent. In other words, you’ll be able to customize the opacity of your VBA userforms.

This macro is similar to the one I used to set a transparent userform color last year and it’s great for making your own Excel Splash Screens. Thanks to one of our readers, Freeman, the macro now lets you fade userforms in and out on both 32-bit and 64-bit machines.

All you have to do is copy and paste the macro above into your Userform and it will fade in when it’s loaded and fade out when it’s closed. The secret is in the FadeUserform macro. The macro accepts two arguments: your userform object and a boolean representing whether you want to fade in or fade out. To call it, all you have to do is type:

to fade out or type:

You would enter that code somewhere in your actual userform module. All this is done for you in the example macro, but keep reading if you want to learn more about how it works.

If you made it this far, you probably already have a UserForm designed. If not, go ahead and do it now.

I’m going to make a simple UserForm with a title and three buttons, like this: 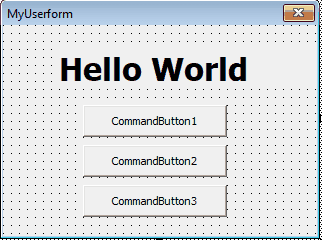 Right-click your UserForm and select “View Code.” Copy and paste the example macro into the UserForm code block.

The macro I included is a lot longer than it has to be if the only thing you wanted to do was fade your userform in and out. That’s because I gave you the option to hide the title bar around your Userform when it’s displayed. If you want to enable this feature, just uncomment the following line in the UserForm_Activate routine:

Uncommenting this line will give you a clean userform without a distracting border and red X. I’m not going to do that in this tutorial, but you can!

Here’s where you get to see all your hard work pay off. Launch your UserForm by pressing F5 or hitting the play button in your Visual Basic Editor. The userform should slowly fade in.

When you’re ready to close your userform, it will fade out. Note: If you hid the title bar and border, you’ll have to click the userform and hit Alt-F4 to exit the form unless you already have an unload me button.

Here’s what my userform looks like when it’s launched and closed:

Instead of fading your userform in and out, you may just want to display it partially transparent. For example, you may want your form to just sit there at 50% opacity. I developed the example macro so it’s easy for you to do just that.

Then, you’ll add the following lines to wherever you want to set your opacity:

I like to place it in the UserForm_Initialize routine.

The SetOpacity line is the important one. The opacity of your userform can vary from 0 to 255, where 0 is fully transparent and 255 is fully opaque. I chose 128 because it’s about 50% transparent. Here’s what my partially transparent userform looks like: 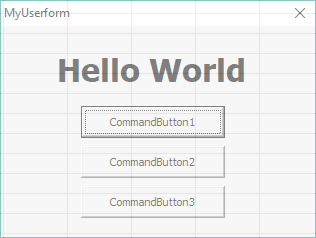 Fading userforms with hidden borders is a surefire way to improve your Excel Splash Screens. I also use them to make little wizard guides for users. These guides are slightly transparent nonmodal userforms that pop up in certain spots on the screen with instructions for users if they appear to be having trouble.

I’m sure you can think of even better uses for fading your userforms in and fading them out.

This was an impressive tutorial, but we’re just getting started. When you’re ready to take your VBA to the next level, subscribe using the form below.

Oh, and if you have a question, post it in our VBA Q&A community.

The best free VBA training on the web
I see people struggling with Excel every day and I want to help. That's why I'm giving away my 90-days to Master VBA eCourse and my entire personal macro library for free.

Over 2 million people use our VBA tutorials each year to help automate their work. Are you ready to reclaim your time, too? Grab our VBA Cheat Sheets and you'll be writing macros like a professional. With over 180 tips and 135 macro examples, they include everything you need to know to become a great VBA programmer.

Join our free 90-day VBA Training Program and start building your reputation as an office innovator.