The VBA Err.Raise method can be used to raise custom errors and start the visual basic debugger. This is a neat way to handle errors instead of displaying instructional msgboxes.

Some people have a bunch of the default run-time error numbers memorized. I’m not one of those people - nor do I care to be - but if you are, you can pair Err.Raise with the vbObjectError constant to avoid conflicts with reserved system error numbers. I’ll explain why that’s important later in this tutorial.

The example macro above loops through all the sheets in the workbook and raises an error when a worksheet named isn’t found. Instead of telling the user the sheet doesn’t exist with a MsgBox, it brings up the following error dialog box: 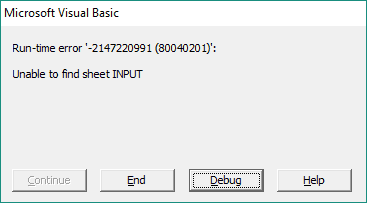 So what would happen if we didn’t raise this custom error message? Copy and paste the following macro into a workbook without a sheet named .

Run the macro and you’ll get a system error message like this: 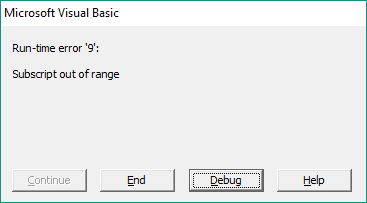 That message isn’t nearly as helpful as the first message, is it? It tells you an error occurred, but it’s not really clear without context why the error occurred.

To help you build your own custom error messages, let’s walk through some of the Err.Raise arguments.

The Err.Raise method accepts 5 arguments, the last 4 of which are optional:

Regarding the Number argument, the help manual says the range 0 to 512 is reserved for system errors and valid numbers above 512 can be used for user-defined errors. To avoid conflicts, it recommends adding your number to the constant vbObjectError, like I did in the example above. Keep reading to find out why this important.

The point I just made about using the vbObjectError in your Number argument to avoid conflicts with pre-defined system errors may not seem that important, but it can save some serious confusion down the road. Let me illustrate what I mean with an example.

Let’s say we rerun my example macro but instead of setting the Number variable to vbObjectError + 513, we change it to this: 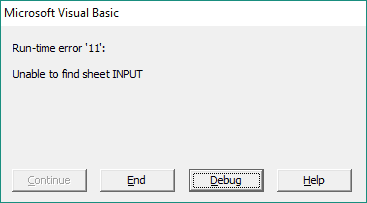 Seems harmless, right? Well, suppose someone ten years down the road saw this error and they Googled “Run-time error 11.” They would see that error 11 supposed to be a division by zero error and they’d be all confused! Well, maybe they wouldn’t be confused in this example, but if you forgot to put the optional description and you just arbitrarily raised error 11, they’d most certainly be confused. 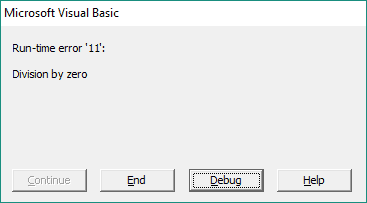 I don’t raise custom errors often, but for small projects where my source code isn’t locked down for the end user, I can see some benefits to handling errors using the Err.Raise method instead of tediously trapping them and trying to get the user to solve them on the fly.

On Error GoTo statements can be confusing and users may not be able to trace where the errors actually occurred. Raising a custom error on the spot might just be another tool in your macro toolbox to help you and your end-users out. I’d love to hear what you think!

If you found this tutorial helpful, please share this article with your friends on Facebook and Twitter and subscribe using the form below. Sharing articles with others is how wellsr.com will continue to grow, so I genuinely appreciate it.