Learn how to restrict a VBA UserForm TextBox to numbers only using the VBA KeyPress event and KeyAscii argument. This macro is flexible enough to also allow negative numbers and decimals in your UserForm TextBoxes.

In case you want to grab the code and go, I’m going to give you the answer up front. I’ll explain how to use it in the Tutorial section.

Now that I’ve given you the solution, I’ll set the stage for how to use it. Let’s say you have an Excel UserForm that looks like this: 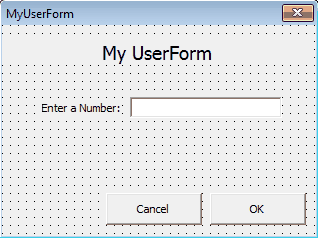 It’s a simple UserForm, with a TextBox near the center. The TextBox is named , but you can name it whatever you like.

The problem is, there’s no property of the TextBox that will allow you to restrict the input to numbers only. The user can enter any character they want! For your code to function properly, you need to find a way to manually restrict the textbox to numeric values only. I’ll show you how. 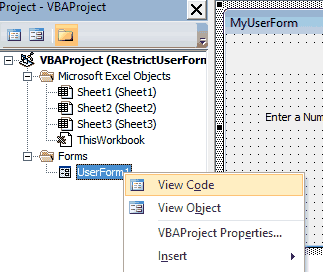 Once you do that, simply copy and paste the example macro.

Don't forget to change the name!

If your TextBox isn’t named , you’ll have to make a few changes.

Everywhere you see in the example macro, you’ll have to change that to the name of your TextBox. If you’re counting, there should be 4 replacements, including the one in the name of the subroutine.

Features of this Macro

Fundamentally, this macro prevents letters and special characters from being entered into your TextBox, but it does more than that.

For example, by checking the KeyAscii value this macro lets the user include a dash, but ONLY if the dash is entered as the first character in the TextBox. This allows the user to enter negative numbers.

Likewise, the macro allows the user to enter a decimal, but it only allows one decimal in the TextBox. A string with more than one decimal isn’t a number!

Anytime you see the line KeyAscii = 0, it’s telling the VBA compiler to not allow the key to be entered into the TextBox. Notice, the only Case in the Select Case logic that doesn’t have a KeyAscii = 0 restriction, is the use of numbers from 0 to 9. Makes sense doesn’t it?

Macros that validate TextBox entries as numeric are ideal when creating something like a UserForm calculator.

Now’s the time I ask/beg/plead you to subscribe to my free wellsrPRO VBA Training Program using the form below. Once you subscribe, you’ll get access to a free copy of my Excel Add-In with tons of useful features and you’ll get monthly tutorials where I show you how to do some pretty cool stuff with VBA:)