Use the FileSystemObject (FSO) to access drives, folders and files with VBA. The FSO is part of Windows Script Host, which provides scripting abilities like batch files. FSO is arguably one of the most powerful APIs you can access with VBA.

This page introduces you to the VBA FileSystemObject, explains every function and method of the FSO, and guides you to helpful tutorials describing how to use many of these FSO methods.

The FSO is the preferred option if you need to access a computer’s file system, as it comes with a whole slew of useful functions no matter what task is at hand. Many file-related tasks could be accomplished by resorting to traditional VBA statements and functions, but this would require much more coding on your part. The price of increased readability and maintainability of your code is a slight performance hit, though. However, for normal uses, the difference in performance between traditional VBA functions and the FSO is negligible.

Another advantage of the FileSystemObject is that its functions have been thoroughly tested. When you deal with files and folders you don’t want to make mistakes, since they could have dire consequences. For instance, imagine having to explain to your boss that a program you wrote deleted a folder with important files by mistake because your code didn’t work as expected! In other words, when you’re dealing with critical data, files or folders, you should always incorporate safeguards into your code. We’ll address this more specifically in subsequent articles on the FSO.

Note, the FSO can only be used with Excel 2000 or later versions.

The FSO is a top-level object in the Microsoft Scripting Runtime object library. Before you can work with the FileSystemObject in VBA, you must set a reference to its object library in the Visual Basic Editor. First, open Excel and press Alt+F11 to launch the VBA editor. Complete the following steps to add a reference to the FileSystemObject in VBA: 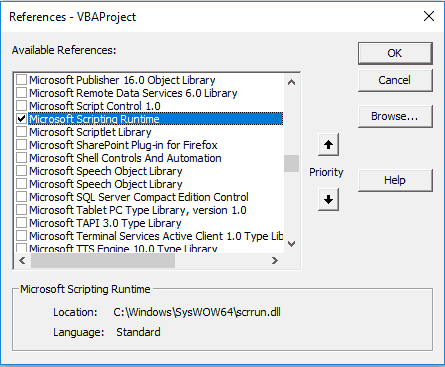 Next, paste the code below into a standard code module.

You are now fully set up to start working with the powerful FSO functions! We’ll add links to detailed tutorials about many of these functions during the coming weeks, so bookmark this page and check back often.

The FileSystemObject is just one of several ways to work with files in VBA. If you want to become a true file I/O expert, you should look at our comprehensive VBA File I/O Cheat Sheet filled with 50+ tips for working with files and over 30 file input/output macro examples. 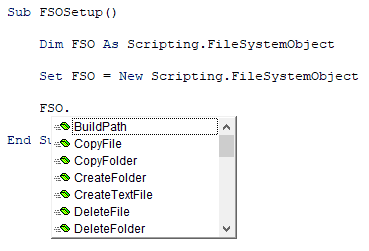 The FileSystemObject makes your life a lot easier when you’re working with files, folders and drives. Many of the FSO methods are self-explanatory, but some do require a bit of explaining. Let’s start by grouping the FileSystemObject methods into categories and then we’ll give a quick rundown of the members of each category.

Throughout this tutorial, we may use the terms “methods” and “functions” interchangeably. The proper term when describing the features of FSO is “methods” but the term “functions” is easier to understand.

This is a complete list of FileSystemObject methods you can use with VBA. We told you FSO was powerful! Incorporating it into your VBA macros makes you just as powerful. Again, we’ll add links to detailed VBA tutorials explaining how to use many of these methods in the future.

The FileSystemObject is your Swiss Army knife when you need to access a computer’s file system through VBA. The possible applications of it are practically limitless. Perhaps you want to automate the collection and consolidation of data contained in non-Excel files from several of your coworkers? No problem! With the FSO functions, you can iterate through folders, find the required files, read or append to them as TextStreams and piece together your report exactly as you want.

Look forward to our future tutorials where you’ll learn about specific applications of the FSO and how to incorporate the necessary safeguards into them!

This tutorial was an introduction to the VBA FileSystemObject. We introduced a lot of information about all the things you can do by connecting VBA with the FSO, but we didn’t give you examples of many of these features. This is a living tutorial, so you’ll want to check back often as we add links to detailed tutorials covering many of the FSO methods listed above.

I hope you enjoyed this tutorial. When you’re ready to take your VBA to the next level, subscribe using the form below.