Principal component analysis, or PCA, is one of the most commonly used dimensionality reduction techniques. Datasets with a large number of attributes, when projected into feature space, can likewise result in a large number of features. This behavior is referred as the “curse of dimensionality,” which can slow down data processing techniques, like when training a machine learning model.

Dimensionality reduction techniques reduce the total number of features in a dataset with minimal affect on the overall data model performance. Another advantage is the reduced feature space allows you to visualize data in two or three-dimensional feature space, whereas that would be near impossible with 8 or 9 features.

The major advantages of PCA are:

With the help of an example, we’re going show you how to perform PCA using the Python scikit-learn (sklearn) library. You’ll train a machine learning model on 8 attributes of different patients to solve a binary classification task of predicting whether or not a patient is diabetic. Next, using PCA, you’ll remove some of the features and see if you can still get good prediction performance.

PCA is one technique for dimensionality reduction, but it’s not the only one. If you’d like an alternative, try our tutorial on Python Linear Discriminant Analysis.

The dataset we’ll use to train our machine learning model can be downloaded in CSV format from this Kaggle link. It’s been mirrored here in case you prefer to download it directly.

Now that you have the dataset, execute the following script to import our first few required Python libraries:

Our next couple lines of code use Pandas read_csv() to import the dataset we just downloaded. By default, the dataset doesn’t contain any headers so a custom list of headers is defined in our script:

The output shows that the dataset contains 9 columns of data. The first 8 columns contain patient attributes on the basis of which the value in the 9th column, Class, will be predicted. Class is simply a binary (0 or 1) result indicating whether or not the patient has diabetes.

Before you apply any machine learning algorithm to make predictions, you need to divide the dataset into a features and labels set, which is easily done in the following script:

The following script divides the dataset into 80% training and 20% test sets using the train_test_split() method from the sklearn.model_selection module. Machine learning models are trained on the training set and evaluated on the test set. The Class of each patient is known in the test set, so that’s how we’re able to evaluate the performance of our trained model.

It’s always a good practice to normalize your data. The following script uses standard scaler to normalize our feature set.

You can use any algorithm to train your machine learning model. For the sake of this example, we’ll use the Random Forest Classifier to train our model. This classifier might sound familiar to you because we used it when we trained our spam email detection model, our Python sentiment analysis demo and several sklearn machine learning examples.

To train with the Random Forest Classifier, you’ll use the fit() method of the RandomForestClassifier class of the sklearn.ensemble module, as shown in the following script. To make predictions on the test set, you need to call the predict() method and pass it your test set.

Finally, you can use the accuracy_score() method from the sklearn.metrics module to evaluate the performance of your model.

The output shows that when using all 8 features, our algorithm achieves an accuracy of 79.87% for correct prediction of whether or not a person is diabetic. That’s not great, but it’s not too bad for a quickly trained model with a limited dataset.

Now that we have our baseline, we’re going to reduce the number of features in our dataset using PCA. We’ll again train our machine learning model on the reduced set of features to see how well our algorithm performs relative to the baseline, unreduced, model we just ran.

Next, you need to pass your feature set to the fit_transform() method of the PCA class, which returns the data reduced into the specified number of principal components. Since you’ll be evaluating your trained model on the test set, you need to reduce the test set to its principal components, as well. For our test set, you can use the PCA model already trained using the training set, then call the transform method on it and pass it the test set.

The following script reduces the training set into 4 principal components - half the original number of features.

In other words, with 4 principal components, you get an accuracy of around 72% so the extra 4 sets of features only contribute to an increase of around 7% in accuracy.

This highlights one the key benefits of PCA, or any dimensionality reduction technique. You may sacrifice a little accuracy but you can get a strong performance boost by only evaluating half the number of features.

Let’s now see what our accuracy is like if we only use 2 principal components.

The output shows that we get an accuracy of 71.42% using only two principal components out of the original 8 features. This shows that the remaining 6 features only contribute to about an 8.5% increase in accuracy. 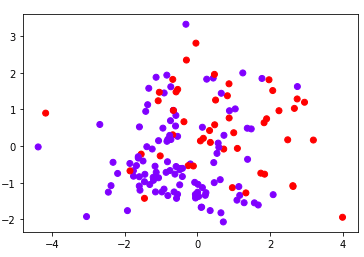 For more Python machine learning examples, join our mailing list below - we send a new tutorial each week so you can really take your Python programming to the next level.