What is Data Scaling and Normalization

Why do we need data scaling?

A dataset in its raw form contains attributes of different types. Consider an example of a fictional dataset of cars. A car can have several attributes, like the number of shifts, model number, distance traveled, price, number of doors, seats and more. All these attributes can have values in different ranges in terms of magnitude. For instance the price of a car can be in millions, while the number of seats often spans from 2 to 7. In other words, the feature values have different scales.

A dataset in a format like this isn’t suitable for processing with many statistical algorithms. For example, the linear regression algorithm tends to assign larger weights to the features with larger values, which can affect the overall model performance.

This article explains some of the most commonly used data scaling and normalization techniques, with the help of examples using Python.

We’re going to use the “tips” dataset from the Seaborn library to show examples of different data scaling techniques in this tutorial.

The “tips” dataset is a fictional dataset containing information related to meals ordered at a restaurant.

The following script imports the “tips” dataset into a Pandas dataframe and displays its header.

Data scaling is applied to numeric columns. In our “tips” dataset we have three numeric columns: , , . The script below filters these three columns and removes the remaining columns. 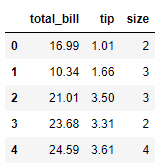 You can see from the above output that our dataset now contains just three columns. Notice the scale of data for the column is very different from the and columns.

Let’s plot some statistical values for the columns in our dataset using the describe() method. 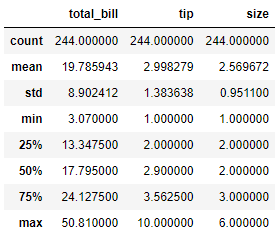 This unscaled dataset is not suitable for processing by some statistical algorithms. We need to scale this data so that’s exactly what we’ll do in the upcoming sections where we’ll show you different types of data scaling techniques in action.

In standard scaling, a feature is scaled by subtracting the mean from all the data points and dividing the resultant values by the standard deviation of the data.

Mathematically, this is written as:

Here, u refers to the mean value and s corresponds to the standard deviation.

The fit_transform() method returns a NumPy array which you can convert to a Pandas Dataframe by passing the array to the Dataframe class constructor. The following script makes the conversion and prints the header for our newly scaled dataset. 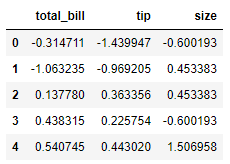 If you call the describe() function again, you’ll see that your data columns are now uniformly scaled and will have a mean centered around 0. 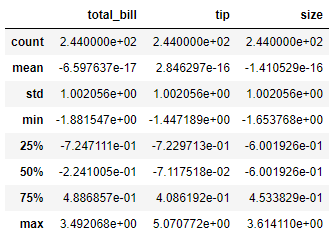 Min/Max scaling normalizes the data between 0 and 1 by subtracting the overall minimum value from each data point and dividing the result by the difference between the minimum and maximum values.

The Min/Max scaler is commonly used for data scaling when the maximum and minimum values for data points are known. For instance, you can use the min/max scaler to normalize image pixels having values between 0 and 255.

You’ll want to use the MinMaxScaler class from the sklearn.preprocessing module to perform min/max scaling. The fit_transform method of the class performs the min/max scaling on the input Pandas Dataframe, as shown below:

Similarly, the script below converts the NumPy array returned by the fit_transform() to a Pandas Dataframe which contains our normalized values between 0 and 1. 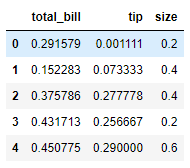 Mean scaling is similar to min/max scaling, however in the case of mean scaling, the mean value, instead of the minimum value, is subtracted from all the data points. The result of the subtraction is divided by the range (difference between the minimum and maximum values).

Like Min/Max scaling, mean scaling is used for data scaling when the minimum and maximum values for the features to be scaled are known in advance.

The scikit-learn module by default doesn’t contain a class for the mean scaling. However, it’s very easy to implement this form of scaling in Python from scratch.

The script below finds the mean values for all three columns in our input Pandas Dataframe.

The mean scaling can be performed by subtracting the data points by the mean values and dividing the result by the range, as shown in the script below:

Finally, the script below prints the header of the Dataframe containing our newly scaled values via the mean scaling technique we just implemented without using any external scaling libraries. 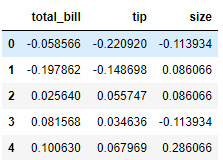 You can use the fit_transform() method from the MaxAbsScaler class of the sklearn.preprocessing module to apply maximum absolute scaling to your dataset.

Just like we did earlier, the script below converts the NumPy array returned by the fit_transform() method to a Pandas Dataframe and then prints the header of our scaled dataset. 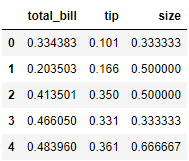 In median and quantile scaling, also known as robust scaling, the first step is to subtract the median value from all the data points. In the next step, the resultant values are divided by the IQR (interquartile range). The IQR is calculated by subtracting the first quartile values in your dataset from the third quartile values.

We talked about IQR values in our tutorial on handling outlier data with Python. This makes sense because median and quantile scaling is the most commonly used scaling technique for datasets with a large number of outliers.

Median and quantile scaling can be implemented via the RobustScaler class from the sklearn.preprocessing module. As with the other data scaling classes from the scikit-learn library, you need to call the fit_transform() method and pass it the input dataset, as shown in the script below:

You’re probably used to this by now, but the script below converts the NumPy array containing scaled values to a Pandas DataFrame and displays the header of the Pandas dataframe. 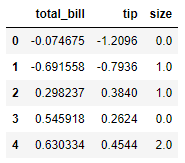 Even without using tips_ds_rs_df.describe(), you can tell just by looking at the and columns that median and quantile scaling doesn’t normalize your data like many of the other scaling techniques we’ve demonstrated.

« Techniques for Handling Outlier Data with Python
Adding Interactivity to Jupyter Notebooks with ipywidgets »
This article was written by Usman Malik, contributing writer for The Python Tutorials Blog.