In this tutorial, we’re going show you how to implement logistic regression for binary classification in Python from scratch - without using any machine learning library.

Many advanced machine learning libraries, like Sklearn, and TensorFlow, implement logistic regression algorithms in a few lines of code. However, it can be valuable to understand what’s happening inside the logistic regression algorithm if you are a new data scientist or even an advanced machine learning researcher. And the best way to understand what’s happening inside is by implementing the algorithm from scratch. That’s precisely what we’re going to do today.

Machine learning algorithms, such as logistic regression, are trained on data. Once trained on the training dataset, an algorithm can make predictions on the unseen dataset.

We’re going to create a dummy dataset with two features for demonstration purposes in this tutorial. The output for each record will be 0 or 1 since our intention is to solve a binary classification problem.

The following script creates the dummy dataset and plots the first ten records. The dataset contains 500 instances in total.

In the output, you can see two dataset features, X1 and X2, and the target label y, which contains 1 or 0. We’re going to use sklearn to make this sample dataset and split it into test and training sets, but we’re not going to use it to implement our logistic regression model. 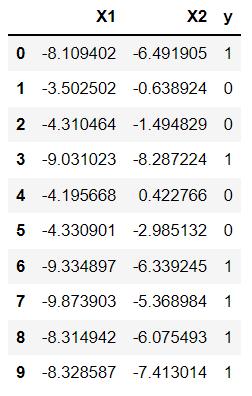 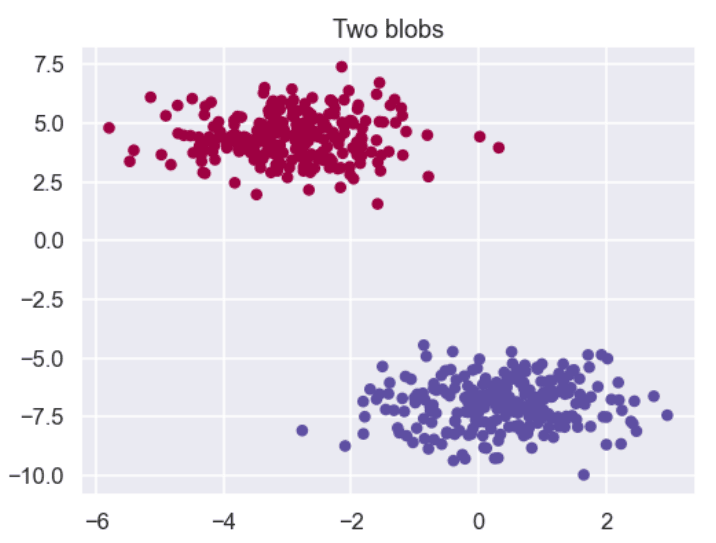 Lets’s print the shape of our dataset:

Our feature set consists of 500 rows and 2 columns; however, the target labels set y is a one-dimensional vector. We need to convert it into a row vector that corresponds to rows in the feature set, as shown in the following script:

Both target labels set now consists of 500 rows and 1 column.

Finally, we’ll divide our dataset into 80% training and 20% test sets. We will train the logistic regression algorithm we’re building from scratch on the 80% training set and evaluate the trained model by making predictions on the 20% test set.

The logistic regression algorithm consists of two steps: a forward pass and a backward pass.

In forward pass, you make predictions on the training set. For the logistic regression algorithm, the formula for the forward pass is:

I know you must be wondering where these XW and B variables come from. Let me explain that. As I mentioned earlier, the logistic regression algorithm finds a straight line that separates your dataset.

The equation of a straight line is:

where X is the input features of your dataset. W stands for the weights in the above equation. The term XW is the dot product of X and W. The term B represents the intercept and is used to calculate the default prediction value in case all the weights are zero. Perhaps you recall seeing the formula for a straight line as y = mx + b. It’s the same concept for the forward pass.

Since X remains constant, the only way to control the slope of the straight line is by updating the weights and bias values.

The equation XW + b outputs a real value depending upon the weights and bias values. Our output target labels are 0 and 1. One approach to force the output of the equation XW + B between 0 and 1 is by using the sigmoid function.

Note: np is going to be defined later with the line import numpy as np.

The script below defines the function for the logistic regression predictions.

We need a loss function to find the best weights and bias values. The loss function shows how good or bad our logistic regression model performs.

The binary cross-entropy function is one of the most commonly used loss functions for logistic regression. However, you can use the mean squared error loss function as well.

The following script contains a Python implementation of the binary cross-entropy function.

The core task in any machine learning problem is to minimize the loss function, which entails finding weights and bias values that return minimum values for the loss function. The backpropagation step performs this task.

In backpropagation you start with random initial values for weights and biases, as shown in the following script:

The dimension of the matrix W is [2,1] since we have 2 features in the dataset, and we want to calculate one value in the output.

Let’s first see what prediction accuracy we get on the test set with the randomly initialized weights.

The above output shows that we do not get a single prediction right with random weights.

We need to find the weights and bias values that give us the best accuracy, or in other words, minimize the loss.

The gradient descent algorithm is the most commonly used method for minimizing the loss of a function.

We are now ready to train our logistic regression model. The following script defines the train_model() method that performs the forward pass and backpropagation.

The epochs here refers to the number of iterations for training the logistic regression algorithm on your training set.

Let’s train our logistic regression model for 2000 epochs. The loss is plotted every 100 iterations.

You can see from the above output that the loss is constantly decreasing. Let’s plot the loss against the number of epochs. 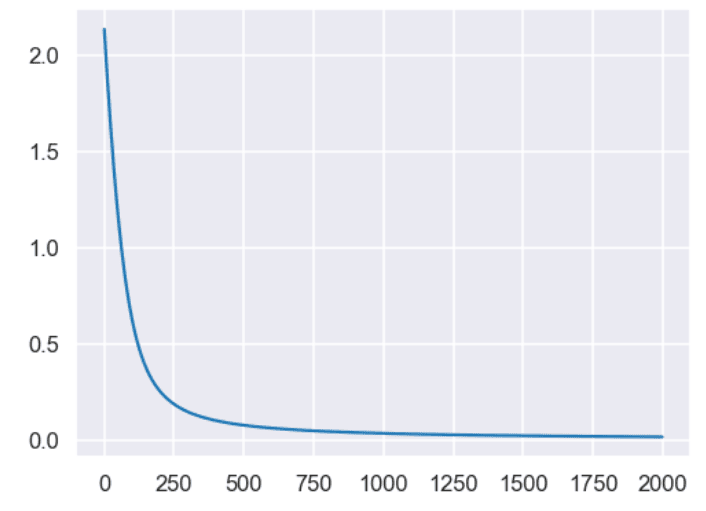 The following script plots the weights and bias values after training:

Making Predictions and Evaluating The Model

The following script makes predictions on our test set using the new weights and bias values learned via backpropagation. The first 10 target labels are printed in the output:

Finally, you can calculate recall, precision, F1 value, and accuracy of your model on the test set via the following script:

The output shows that our model’s accuracy is 100%, as it correctly predicts the target labels for all the instances in the test set.

« Using Python Pycoingecko to Get Real-time Cryptocurrency Prices
Implementing an Artificial Neural Network from Scratch in Python »
This article was written by Usman Malik, contributing writer for The Python Tutorials Blog.