Data analysis is one of the most important prerequisites to developing decision support and data-centric applications. Since a picture is worth a thousand words, the importance of visual data representation increases tenfold. This article explains how to perform data visualization in Python. Several libraries are available for data visualization in Python, including Matplotlib and Pandas.

Behind the scenes, the Seaborn library uses the functionalities of the Matplotlib library. However, seaborn not only improves Matplotlib but provides a variety of additional plotting capabilities. Therefore, without any ado, let’s start plotting with Seaborn.

We will be using the dataset which comes built-in with the Seaborn library. The tips dataset contains information about the bills paid by the customers at a fictional restaurant. The following script imports the seaborn library and then loads the dataset into your application.

In the above script the set_style() method sets the style of the plots. Next, the load_dataset() method is used to load the dataset into the dataframe.

Let’s now plot the shape of the dataset:

The output shows that the dataset has 244 rows and 7 columns. To see the first 5 rows of the tips dataset, you can use the head() method as follows:

In this section, you will see how to plot the following graphs with the Seaborn library: 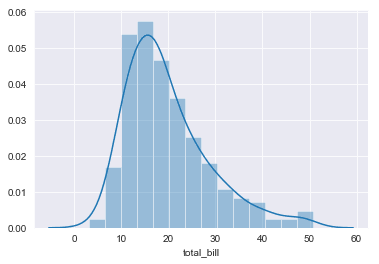 You can see that most of the time, the amount of the bill is between 10 and 20.

The scatter plot draws a graph that shows the interaction between the two numeric columns in the form of scattered data points. The scatterplot() function is used to draw a scatter plot as shown below:

The above script plots a scatter plot for total_bill on the x-axis and the tip on y-axis. Here is the output: 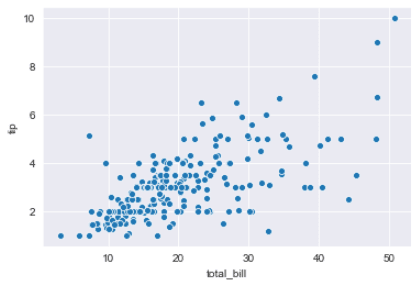 The line plot draws relationship between two columns in the form of a line. The lineplot() function of the seaborn library is used to draw a line plot. The following script draws a line plot for the size on the x-axis and total_bill column on the y-axis. 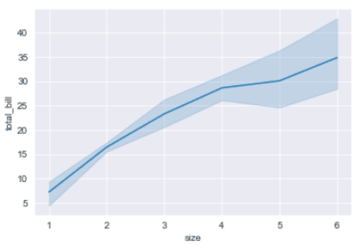 The output shows that with the increase in the number of people in the group for whom the bill is paid, the total bill also increases which is pretty understandable since more people order more food items and fewer people in a group order fewer food items.

The bar plot is used to plot the mean of a numerical column against all the unique values in a categorical column. For instance, if you want to plot the average amount that people spend during lunch and dinner, you can plot the following bar plot. 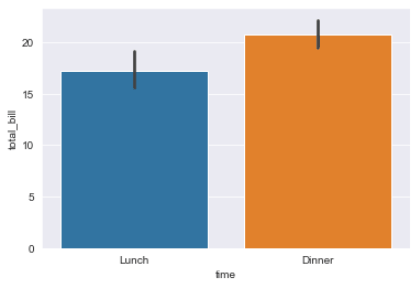 The factor plot is used to plot multiple categorical columns against a single numerical column. For instance, if you want to plot the average bill against the time of day, and then you want the time information further divided into whether the person who paid the bill smokes or not, you can use the factor plot as shown below: 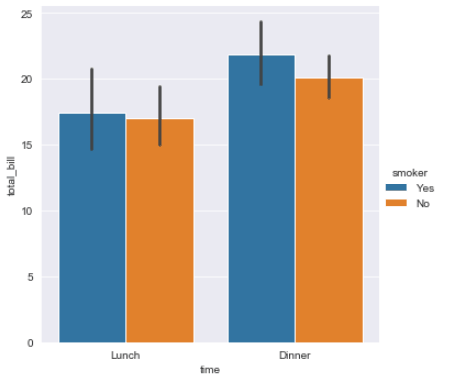 The output shows that average amount of bills is higher for dinner. Also, for both dinner and lunch, smokers spend slightly more as compared to non-smokers. 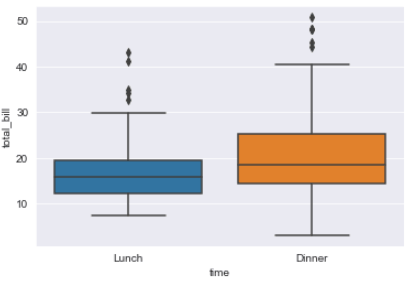 You can categorize box plots further. For instance, the following script plots box plots for total bill during lunch and dinner time where the bill is paid by a Male or Female. 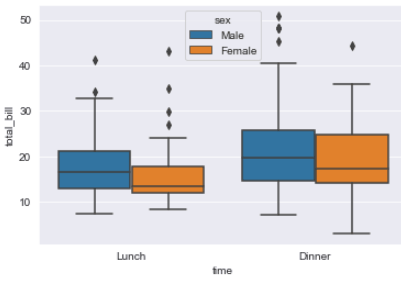 You can see that for both lunch and dinner, males paid more bills than females. Furthermore, the difference in the average bills paid by males and females is higher for lunch, as compared to the average bill paid during dinners. 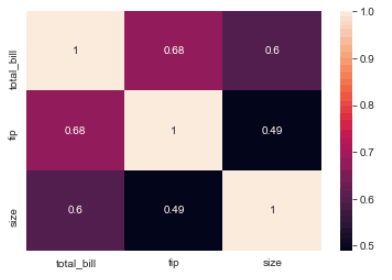 The pair plot is a graph that plots the relationship between all the numeric columns in the form of multiple scatter plots. Along the diagonals, the histogram of the columns is displayed. The pairplot() function is used to plot the pair plot as shown below: 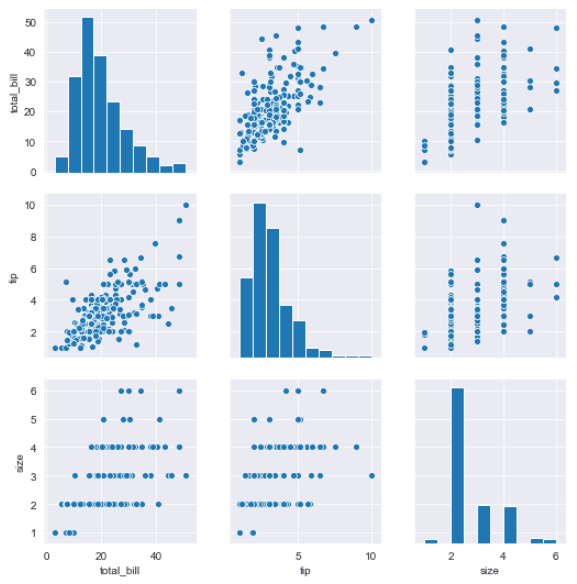 Seaborn is an extremely useful library for data visualization in Python. In this article you saw how to plot some basic graphs with Seaborn. However, this is merely a tip of the iceberg. Seaborn has much more to offer. We’ll be publishing more seaborn plotting tutorials soon so subscribe below to make sure you don’t miss them!

If you have a question about this tutorial or need some guidance on your specific project, head over to our wellsr Q&A community and leave a comment. We'd love to help you learn more about Python!

This article was written by Usman Malik, contributing writer for The Python Tutorials Blog.

The Python Tutorials Blog was created by Ryan Wells, a Nuclear Engineer and professional VBA Developer. Ryan developed a unique 3-part free Excel training program to help others quickly learn VBA in a natural setting: right inside Excel. After his successful VBA Tutorials, which have helped hundreds of thousands learn to write better macros, he built The Python Tutorials Blog to teach people Python in a similar systematic way.