If you missed it, Part 1 of our series on the Python OS module described how to use chdir and getcwd to set your current working directory. Part 2 demonstrated how to list all files and folders in a directory using Python OS.

Recall that during our series on the Python OS module, we’ll be assuming the following directory structure: 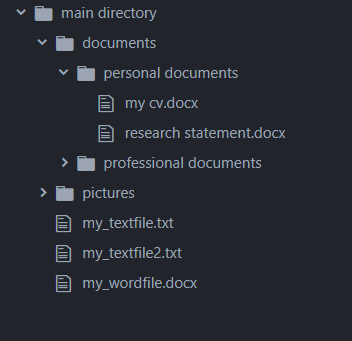 Our first tutorial left off with our current working directory set to using the following script:

This will be our starting point for this week’s tutorial on opening files, but we’ll also show examples for how how to open files, regardless of your current working directory.

To open a file using the Python OS module, you need to import the OS module, then call the system() method and pass it the path of your file. It’s important to recognize that the system() command doesn’t open a file behind the scenes for reading or writing (file I/O). It physically launches your file or application on your screen using the default program associated with it. To open files for reading and writing, we have a full tutorial on Python File I/O.

To test this, the following script opens the file in your current working directory using Microsoft Word.

Although this script defaults to looking for a file in your current working directory, the system() method actually lets you specify a full file path. To demonstrate this, run the following Python script, which opens a file and then prints a command letting you know the file was opened:

The final part of our series on the Python OS module will explain how to create and remove files and folders on your system. Take a look, and then subscribe using the form below for more free tutorials designed to make you a true Python expert.

« List Files in a Folder With Python OS listdir and walk
Python OS Delete Files and Create Folders »
This article was written by Usman Malik, contributing writer for The Python Tutorials Blog.